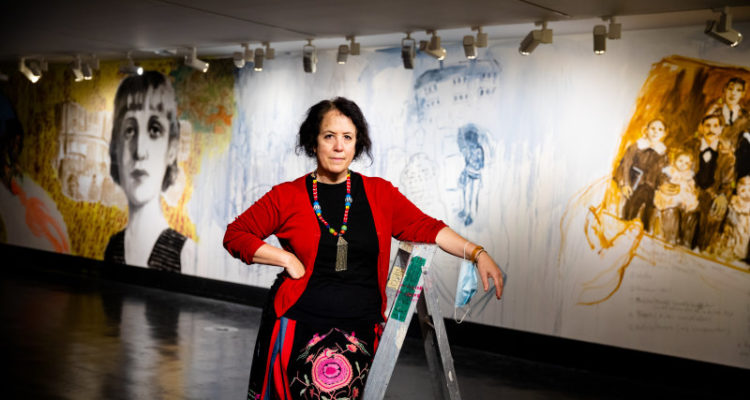 Archibald winner Wendy Sharpe has been working on this mural for two years. Because of COVID, no one will be able to see it. (Edwina Pickles)

The heartbreaking exhibition that no one will see

At more than 40 metres long and covering all four walls of the Sydney Jewish Museum’s temporary exhibition space, Wendy Sharpe’s latest project is part travelogue, part family history and part meditation on place and time. Some two years in the making, it’s a monumental work from one of the nation’s best-loved artists.

But incredibly, apart from the artist herself and a few museum staff, no one will ever see the mural before its scheduled destruction at the beginning of September.

While the piece was only ever intended to be a temporary work before being torn down when the museum begins a major renovation project, it was still meant to be open to the public for two months.

However, that period has coincided exactly with Sydney’s pandemic lockdown, which has forced the museum to close its doors before a single visitor gets to see the work.

“I’m really disappointed but there is absolutely nothing I can do about it,” said Sharpe, who won the Archibald in 1996 and Sulman in 1986. “I wanted it to disappear eventually but I wanted people to see it first. It’s quite extraordinary that my working on the mural coincided with the most severe and longest lockdown we have had in Sydney.”

Sharpe’s parents were English and her father, the late writer and historian Alan Sharpe, had Russian and Jewish ancestry. Reading her father’s diaries sparked a passion in Sharpe to discover more about her past.