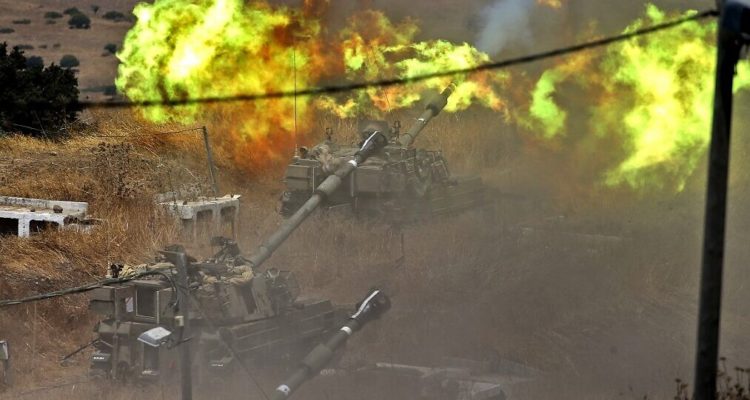 Israeli self-propelled howitzers fire towards Lebanon from a position near the northern Israeli town of Kiryat Shmona following rocket fire from the Lebanese side of the border, on August 6, 2021. (Jalaa Marey / AFP)

Tel Aviv: The Iranian-backed Lebanese group Hezbollah said it had fired rockets at open ground near Israeli positions in the disputed Shebaa Farms area on Friday, escalating cross-border hostilities amid tensions with Iran.

In a statement, Hezbollah said the attack with dozens of rockets was a response to Israeli air strikes on Thursday which the Shi’ite Muslim group said had hit open areas in southern Lebanon.

The Israeli military said at least 10 rockets were launched towards Israel from southern Lebanon.

“In response to the 10+ rockets just fired at Israel from Lebanon, we are currently striking the rocket launch sites in Lebanon,” the Israeli army said in a statement.

It was the third day of cross-border hostilities that threaten a period of calm prevailing since 2006, when Israel and Hezbollah fought a one-month war.

Israel launched retaliatory shelling and air strikes earlier this week in response to rockets fired from Lebanon and for which no group claimed responsibility.

Most of the rockets unleashed on Friday were intercepted by Israel’s Iron Dome system, its military said, and the rest fell in open areas. There were no reports of damage or casualties.