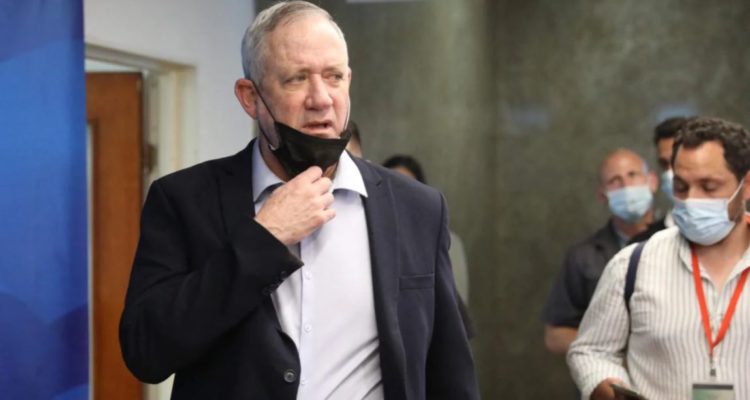 Benny Gantz has threatened retaliation for an attack on an Israel-linked vessel. (AFP)

An explosion on board an oil tanker moored at a port in Syria on Tuesday injured two people and raised suspicion it had been hit by Israel in retaliation for alleged Iranian attacks on shipping.

Smoke was seen billowing from a ship moored at Latakia port and identified by the TankerTrackers.com monitoring website as the Wisdom, a Panama-flagged, Beirut-registered vessel that has already been hit once this year by a mysterious explosion.

It is said by marine security experts to be used to transfer oil from Iranian supertankers that are too large to moor at oil import facilities on Syria’s northwest coast. The attack’s cause was unconfirmed, but the explosion was being reported in Israel within minutes.

Last month two crew members, a British security officer and a Romanian sailor, were killed when an explosive drone hit the bridge of the Mercer Street, an oil tanker in the Gulf of Oman operated by a company owned by an Israeli billionaire. Israel, the US and Britain accused Iran of responsibility, which it denied.

Last week armed men said to be speaking Persian boarded an asphalt tanker off the Oman coast, but fled after the crew disabled its engines and US and Omani warships approached.

The attack on the Israel-linked vessel prompted Israeli Defence Minister Benny Gantz to threaten retaliation. “We are at a point where we need to take military action against Iran,” he said. “The world needs to take action against Iran now.”