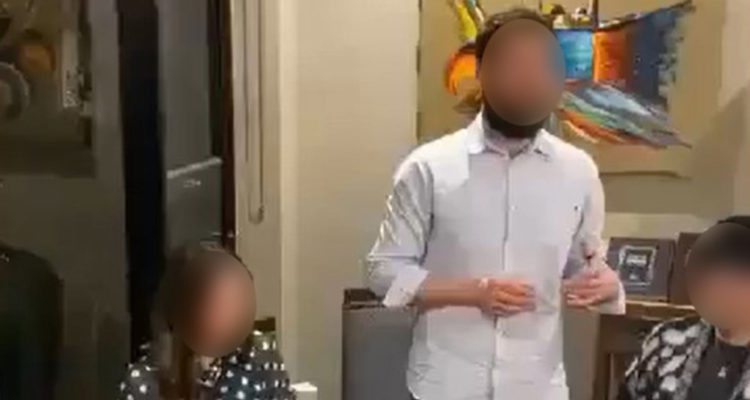 Screenshots of the man giving the speech at the gathering.

People in Melbourne’s inner south-eastern suburbs are on high alert after a guest at a crowded engagement party last week attended by dozens of people tested positive for coronavirus.

The video, seen by The Age, shows a gathering of people listening to a man giving an engagement speech to a crowded room of well-dressed guests at what appears to be a private residence.

“Clearly this is legal,” the man says to the room, “because this is a group therapy session.” The crowd, made up of men and women from young children to middle age, laughed at the joke.

“Thank you so much to everyone who came here tonight,” he says.

Private and public gatherings are not permitted under Victoria’s strict stage 4 lockdown, which began on August 5. Weddings are allowed in exceptional circumstances, but are always capped at five attendees.

The Age has chosen to run an audio recording of the speech and some still images, but not to name people in the video, or show their faces.

When contacted by The Age, the mother of the man speaking in the video, who was also in attendance, said her family was reeling from the experience.

“My son is broken over this,” she said, declining to speak further.

Read the article by David Estcourt and Paul Sakkal in The Age.