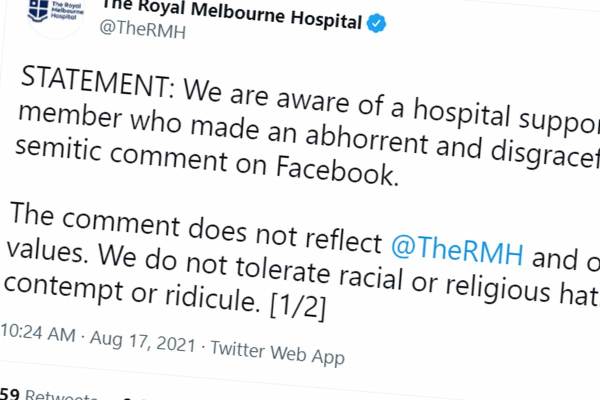 A Jewish man says the only race Victorians should be focusing on right now is the race to get vaccinated against COVID-19.

It comes amid a wave of anti-Semitic commentary following the now infamous engagement party held in breach of the state’s restrictions that has rightly outraged Victorians.

A woman who worked as a hospital support staff member at the Royal Melbourne posted on Facebook those involved should be ‘sent to the gas chamber’ in a move the hospital has since described as abhorrent and disgraceful.

The woman is no longer employed by the hospital.

Menachem Vorchheimer was somebody who highlighted her comment on social media, which ultimately led to that action being taken by the hospital.

“The community is in a very vulnerable state at the moment,” he told Neil Mitchell.

“Unfortunately, people are looking for others to blame, rather than uniting as a community.

“We need to delineate between mistakes that individuals make and casting aspersions on particular groups and bringing out the race hatred element.

“We’ve only got one race to focus on at the moment and that’s the race to vaccinate, not race warfare.”

Listen to report by Neil Mitchell on 3AW News Talk.