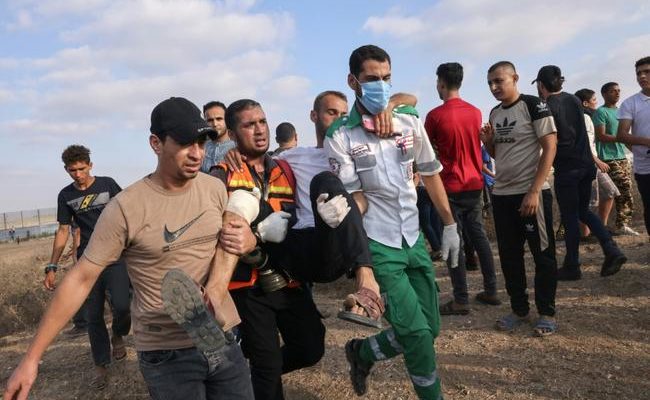 Palestinians protest near the border fence with Israel, east of Gaza City, to denounce the Israeli siege of the Palestinian enclave and express support for Jerusalem’s Al-Aqsa mosque, on August 21, 2021

Israeli warplanes bombed Gaza Saturday after clashes between its troops and Palestinian protesters left dozens injured, including an Israeli border policeman and a 13-year-old Palestinian boy who were both critically wounded.

The Israeli military said it carried out air strikes against four weapons sites and that it had reinforced its Gaza division with additional troops.

Israeli troops fired at Palestinian protesters who gathered near the Gaza border wall, the army and Palestinian witnesses said.

The Hamas-run Gaza health ministry said the injured included a 13-year-old boy left in a critical condition after being hit in the head.

The Israel Border Police said a 21-year-old sniper in its undercover unit was critically wounded when he was shot by a Palestinian protester.

Defence Minister Benny Gantz had warned that “these are definitely extremely serious events that will have a response”.

There were no immediate reports of any casualties from the strikes.

“Al-Aqsa Mosque is a red line, and any attack on it will be met with valiant resistance from our people,” the movement said in a statement.

Read the article in the Mercury (AFP).