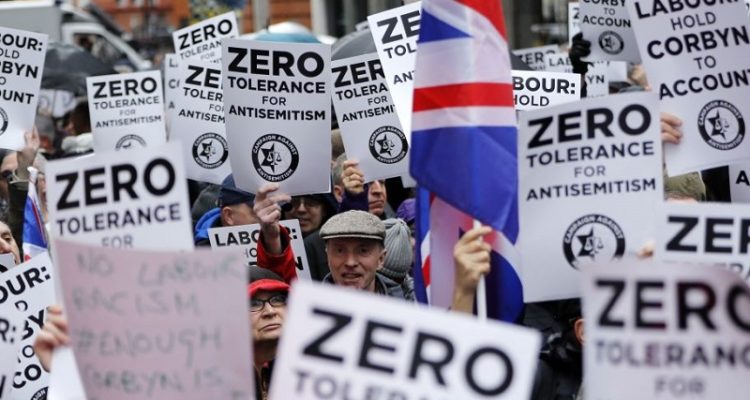 No doubts about antisemitism amongst this group of protesters in Britain

The Jewish community’s awareness of the threat of racism and antisemitism is longstanding. That awareness extends across political boundaries and is part of a general desire to live in a cohesive society, tolerant of diversity.

Countering antisemitism requires in the first instance being able to identify and recognise it.

In 2005 the European Monitoring Centre on Racism and Xenophobia (EUMC) published a draft definition of antisemitism to assist in classifying and tracking incidents of anti-Semitism in EU countries. It was never formally adopted but was then picked up in 2016 by the International Holocaust Remembrance Alliance (IHRA) and adopted as a Working Definition of Antisemitism together with accompanying ‘contemporary examples’.

The definition is short. “Antisemitism is a certain perception of Jews, which may be expressed as hatred toward Jews. Rhetorical and physical manifestations of antisemitism are directed toward Jewish or non-Jewish individuals and/or their property, toward Jewish community institutions and religious facilities.”

The working definition is accompanied by examples that include, “Making mendacious, dehumanizing, demonizing, or stereotypical allegations about Jews as such or the power of Jews as collective – such as, especially but not exclusively, the myth about a world Jewish conspiracy or of Jews controlling the media, economy, government or other societal institutions.”

This extract from an interview several years ago illustrates antisemitism:

“Zionists are dominant in the upper echelons of finance. Look at the ethnic background of almost all the major figures connected to the 2008 sub-prime crisis. Zionist power in the media, including the new media channels, is obvious. The top stratum of leading universities also reflects Zionist presence and influence. Hollywood and the entertainment industry as a whole is another example of subtle Zionist influence.”

Read the article by Harold Zwier on Pearls and Irritations.