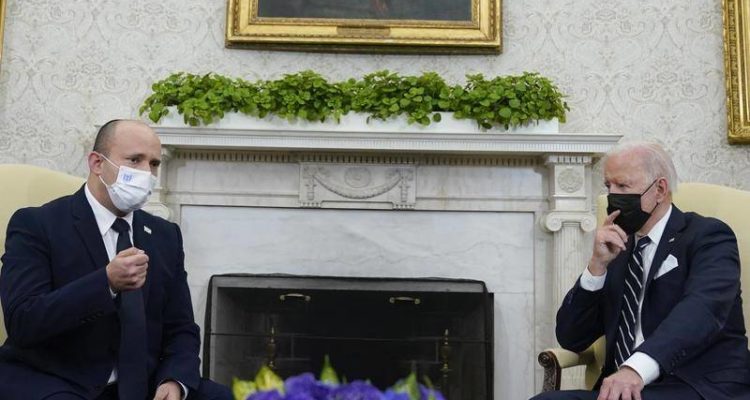 President Joe Biden has told Israeli Prime Minister Naftali Bennett that diplomacy was his first option, but he would consider other options if his effort to revive the Iran nuclear deal fails.

Biden made the comments as the two sat down for their first face-to-face meeting since Bennett was sworn-in as prime minister in June.

“We’re putting diplomacy first and seeing where that takes us,” Biden said during an Oval Office meeting on Friday that was delayed by the suicide bomb attack in Afghanistan. “But if diplomacy fails, we’re ready to turn to other options.”

Bennett arrived at the White House aiming to dissuade Biden from returning to the Iran nuclear deal that was brokered during the Obama administration and later scrapped by President Donald Trump.

Since the US withdrawal from the deal in 2018, Tehran over time has abandoned every limitation the accord imposed on its nuclear enrichment. The country now enriches a small amount of uranium up to 63 per cent, a short step from weapons-grade levels, compared with 3.67 per cent under the deal.

It also spins far more advanced centrifuges and more of them than were allowed under the accord, worrying nuclear nonproliferation experts even though Tehran insists its program is peaceful.

Read the article by Aamer Madhani in The West Australian and the Goulburn Post.