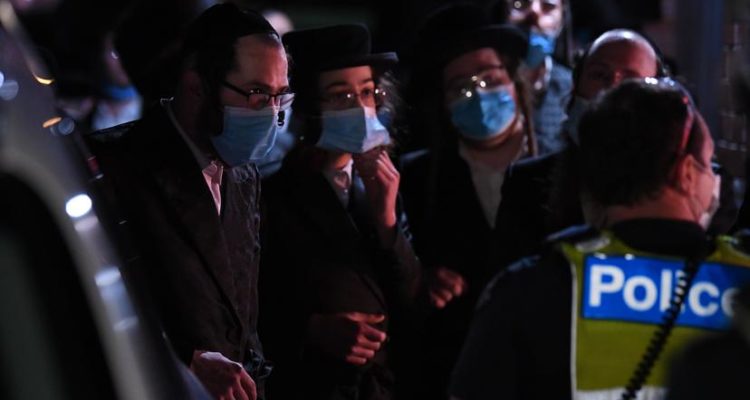 Melbourne worshippers WILL be fined after gathering to mark Jewish holiday

Worshippers who gathered near a synagogue in Melbourne’s southeast in apparent breach of COVID-19 lockdown rules have had their details taken and will be fined by police.

People were spotted entering a building, believed to be a prayer room, near a Ripponlea synagogue early on Tuesday morning to mark the Jewish holiday of Rosh Hashanah.

On Tuesday afternoon, officers surrounded both front and back entrances of the building, where an Orthodox Jewish group was suspected to be congregating upstairs.

The stand-off ended just after 8pm, with several people filing outside as a group of worshippers who were loitering outside became aggressive.

A cameraman was pushed and the group briefly chanted and clapped in the alleyway, with police taking details before moving them on.

“All adults who attended will be issued with a $5452 fine. A number of children who were present will not be fined,” a Victoria Police spokesman said in a statement.

“Investigators believe a number of other people were present and are yet to be spoken to by police. Investigators are working to identify them.”

Watch the news report on Channel 7.