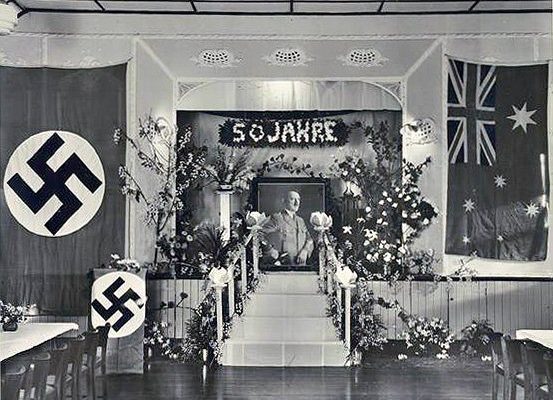 How Australia normalised the Nazi

Yesterday, CFMEU secretary John Setka faced the media and claimed that there was a Nazi element present during the demonstrations in Melbourne. Sadly, it wasn’t hyperbole, as this image appeared on social media late yesterday.

In February, the swastika appeared in the aisles of fruit and vegetable market in the same city, as an unnamed man wore the infamous armband whilst doing his shopping. The incident was reported to the police, who eventually informed the market that there was nothing that they could do, as there is no law that stops the wearing of nazi imagery and insignia.

Bitterly, the flag of Hitler’s monstrous regime is now a common sight on these shores. Be it waved in well-covered protests, links to elected officials, or the talking heads that are given space by our mainstream media.

In Australia, ‘national pride’ takes the form of evoking the spirit of the ANZAC while flying the flag of the country that the ANZAC died fighting. This took a literal turn today, as far-right protesters made their stand at Melbourne’s Shrine of Remembrance.

“They Dressed Well” is an article from TIME magazine from June of 2000, long before Donald Trump was on anyone’s mind as a presidential candidate, before “alt-right” was a term on everybody’s tongues, but two years after American History X hit theatres.

The piece talks about “Nazi chic” in Korea, where people idolise the style of the Nazis. Something which, as everyone knows, they were very good at; Hugo Boss made the SS uniforms, as everyone is so fond of reminding us all, and the Volkswagen Beetle was made at Hitler’s request.

Read the article by Andrew Wicks on The Big Smoke.