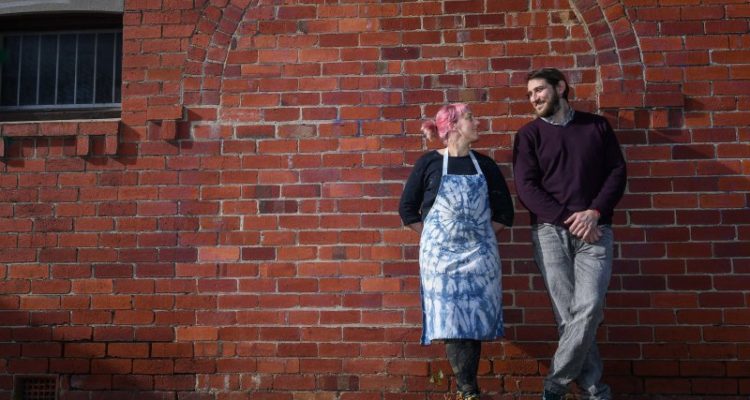 Maaryasha Werdiger (left) and Shaya Rubinstein: “We share a desire to be faithful to the Jewish life, but swim in our own lane.” (Joe Armao)

Maaryasha Werdiger, 41, and Shaya Rubinstein, 38, have been married for 14 years. When he called in late to their second Skype date, she thought he’d stood her up – until she heard the crackle of an ambulance radio in the background.

Maaryasha: We were both raised in Chabad, a Jewish Orthodox sect. A friend emailed me: “You need to meet this guy.” I thought it was ridiculous – he was in New York, I was in Melbourne – but I looked at Shaya’s MySpace profile. He was cute, we were into the same music. He was younger, but that didn’t matter; older guys can be babies anyway.

We made an arrangement to Skype. He appeared on my screen with a helmet on. He thought he was being funny, pretending to pick me up on a motorbike. I thought, “Hmm, not that funny.” The second video date I thought I’d been stood up and then he called and told me he’d had an accident. I didn’t believe him until I heard the ambulance in the background. Both his legs were broken.

He had to take painkillers, so we had really bad conversations, but we pushed through. I found myself talking to him all night, and after a week I knew we were going to get married. After eight weeks, he came to Australia, walking with a cane. He proposed after two weeks and we got married three months later. It sounds crazy but in our sect, marriage is the main goal. It’s acceptable to marry someone you don’t really know.

The things I liked then were the things I like now. He is kind. He is not judgmental. He will work on himself if he needs to. In the sect, a lot of men are not that progressive. We are spiritually aligned. We raise our children [we have three sons] in a religious community because we like things like Shabbat, where we switch off – no driving, no technology, just family time. But we reject things we think are toxic. We are in the community in our own way, but neither of us quite fits in.

Read the article by Dani Valent in The Age.