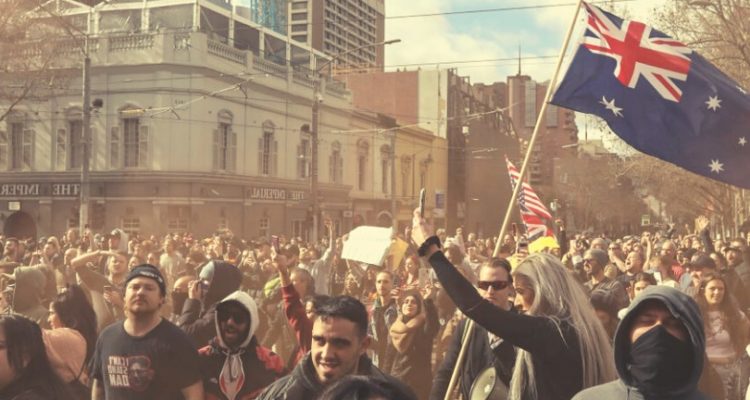 In the wake of Melbourne’s turbulent anti-lockdown protest in August, a string of stickers appeared in the CBD accusing Jews of responsibility for the 9/11 terrorist attacks. The stickers were confirmation that online hate movements are shifting to physical-world political activity.

An investigation by Plus61J has identified 24 Australian anti-lockdown groups that espouse antisemitic or neo-Nazi views.

Together, these groups have approximately 98,000 followers.

While both men insist they have no control over these groups’ activities, Labor’s Shadow Home Affairs Minister, Kristina Keneally, told Plus61J that the groups’ expressions of solidarity with elected politicians have helped legitimise them by taking their extreme views from the social media echo chamber to the floor of parliament.

Unlike the hard-right groups of old, which struggled to recruit more than a few hundred followers, today’s anti-lockdown extremist channels have attracted mass support. One of them, Wake Up Australia, has 17,000 subscribers – a membership figure exceeding that of the NSW Labor Party.

Read the article in The Big Smoke.