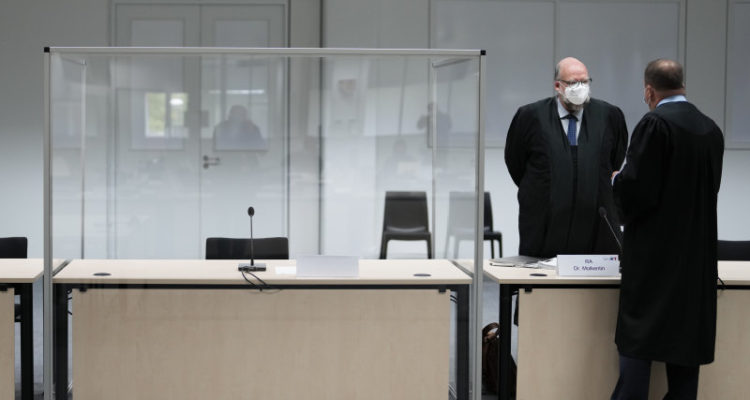 The dock sits empty in a courtroom in Itzehoe where the trial of a 96-year-old woman was due to start. (AP)

Itzehoe, Germany: A former secretary for the SS commander of the Stutthof concentration camp skipped the planned start of her trial in Germany on more than 11,000 counts of accessory to murder, officials said. She was picked up several hours later after the court issued an arrest warrant.

The 96-year-old woman left her home near Hamburg in a taxi on Thursday morning, a few hours before proceedings were due to start at the state court in Itzehoe, court spokesperson Frederike Milhoffer said.

The court issued the warrant and delayed the reading of the indictment until the next scheduled hearing on October 19 because that couldn’t be done in the defendant’s absence.

The accused woman previously had “announced that she didn’t want to come” to court, but the statement did not provide sufficient grounds for detaining her ahead of the trial, Milhoffer said. Given the woman’s age and condition, she had not been expected “actively to evade the trial,” Milhoffer added.

The court said on Thursday afternoon that the defendant had been caught and police would bring her to the court, German news agency dpa reported. A doctor was to examine whether she was fit to be jailed before the court decides whether or not to put her in custody.

Read the article by Markus Schreiber and Kirsten Grieshaber in The Sydney Morning Herald.