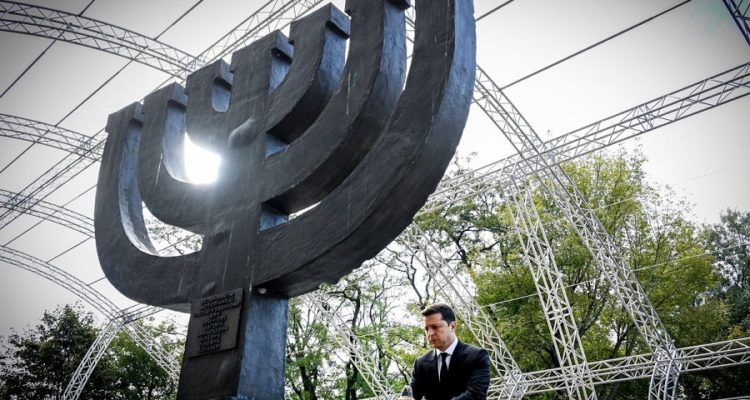 Ukraine marked the 80th anniversary on Wednesday of the mass shooting of civilians at the wooded ravine of Babyn Yar in Nazi-occupied Kyiv, one of the biggest single massacres of Jews during the Holocaust.

Nazi troops at Babyn Yar gunned down nearly 34,000 Jewish men, women and children on 29th and 30th September, 1941. Over the two years that followed, around 150,000 people in total, mostly Jews but also including Ukrainians, Russians, Poles and Roma, were killed there.

In silence, Zelenskiy took part in a ceremony near a monument of a Jewish menorah lamp erected to honour victims at the site. Flowers and wreaths were laid by soldiers, children and relatives of the victims.

Zelenskiy is Ukraine’s first ethnically Jewish president, although he is not publicly religious. Most of his grandfather’s family was killed during the war.

“The death conveyor in Babyn Yar did not stop until the liberation of Kyiv from the occupiers. Kyiv’s plot of land became one of the epicentres of the Holocaust in Eastern Europe,” Ukrainian foreign ministry said.