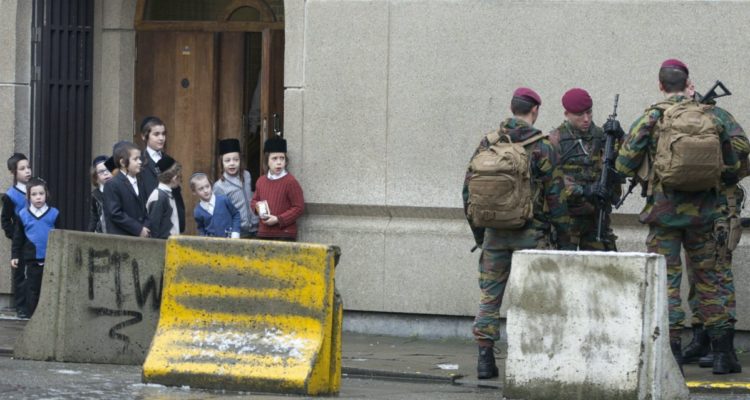 In this Saturday, 24th January, 2015, file photo, young Jewish children look at Belgian soldiers as they patrol during religious services in Antwerp, Belgium. The European Union unveiled a new strategy to combat growing anti-Semitism in Europe on 5th October with plans to better tackle hate speech, raise awareness about Jewish life, protect places of worship and ensure that the Holocaust is not forgotten. (AP /Virginia Mayo)

According to Europe’s Fundamental Rights Agency, nine out of 10 Jews consider that anti-Semitism has increased in their country and is a serious problem. More than one in three people have considered emigrating to escape the abuse.

The EU’s executive branch, the European Commission, said it was presenting what amounts to the first strategy of its kind given the “persistence and a significant increase of anti-Semitic incidents” around the 27-country bloc.

Commission President Ursula von der Leyen said that “the strategy we are presenting today is a step change in how we respond to anti-Semitism. Europe can only prosper when its Jewish communities feel safe and prosper.”

Under the plan, which will be rolled out over this decade, the commission will use EU funds to support member countries as they develop their own national strategies and complement their actions.

The aim is to set up a Europe-wide network of “trusted flaggers” along with Jewish organizations to help remove illegal online hate speech. Brussels will also work with industry and IT companies to prevent the illegal display and sale of Nazi-related symbols, memorabilia and literature online.