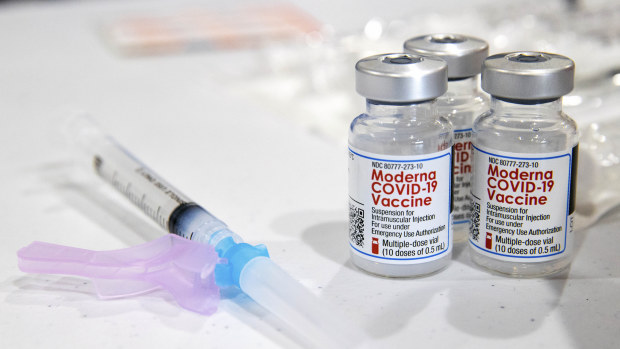 Moderna is one of the three booster vaccines that may be offered to Australians. (AP)

A three-day surge in vaccinations has pushed Australia beyond Israel and the European Union for the proportion of population with a first dose of COVID-19 vaccine, Health Minister Greg Hunt said.

He said 30 million doses of vaccine had been administered, with 81.5 per cent of eligible Australians having received a first jab and 60.2 per cent fully vaccinated.

“What that means in the international context is that in terms of whole of population first dose coverage, we’ve not only passed the USA, but we’ve also passed Israel and the EU,” Mr Hunt said.

By Saturday, NSW will have reached a milestone 90 per cent of residents aged 16 and over having had a first dose of vaccine.

Mr Hunt said the case load reported in Victoria on Friday – 1838 new cases, the highest daily tally in any Australian jurisdiction since the beginning of the pandemic – was “confronting”, but added that galloping vaccination rates in Victoria would start to bring those numbers down.

The Australian Technical Advisory Group on Immunisation has approved booster shots for about 500,000 fully vaccinated, immunocompromised people and will decide by the end of the month whether to roll out third jabs to the general population.

The approval of booster shots for severely immunocompromised people, such as some cancer or HIV patients or those who have had transplants, mirrors similar moves overseas to roll out third doses as vaccine efficacy starts to wane.

Read the article by Wootten in the Australian Financial Review.