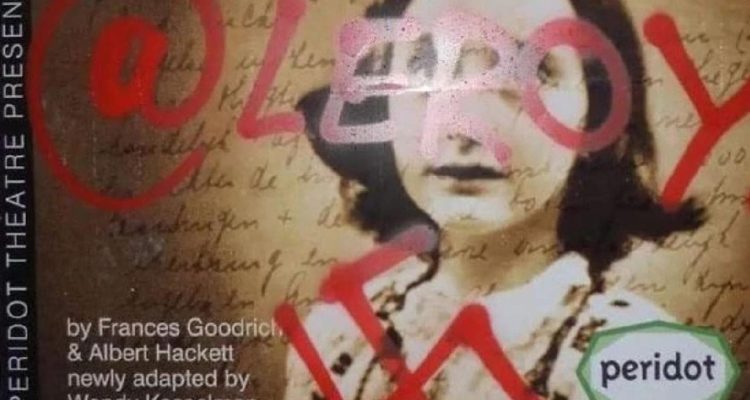 The Anne Frank poster for a performance by the Peridot Theatre Company was defaced with a swastika. Anne Frank has become a popular figure in death.

People love dead Jews but live ones? Not so much

People Love Dead Jews is one of the more eye-catching titles of the year. But living Jews? Author Dara Horn answers the question this way: “Not so much.”

With five novels to her credit, this latest book – the full title is People Love Dead Jews: Reports from a Haunted Present (Norton) is a collection of 12 essays, some previously published, others original. Horn is a mistress of black humour; her ironic tone is the hallmark of contemporary Jewish writing. Three essays examine the aftermath of attacks on Jewish communities. These attacks provoked deep-seated fears in the author that being Jewish is no safer than it ever was and that surprisingly America is not “the home of the free” for Our People. Media reportage confirms her suspicions. An attack in Jersey City is “explained” as the result of Hassidic Jews priced out of Brooklyn relocating to Jersey City. Apparently Jews are to blame.

In the essay entitled Everyone’s Second Favourite Dead Jew, Anne Frank is a heavily freighted symbol. While her book has sold more than 30 million copies in 70 languages, Horn’s argues we have lost sight of Anne Frank. To her now cliched observation “I still believe despite everything that people are truly good at heart”, Horn replies “three weeks after writing those words, she met people who weren’t”. The diary has become a parable of generalised hope, as if a generosity of spirit is all that’s required for the world to be a better place.

Read the review by Louise Adler in The Australian.