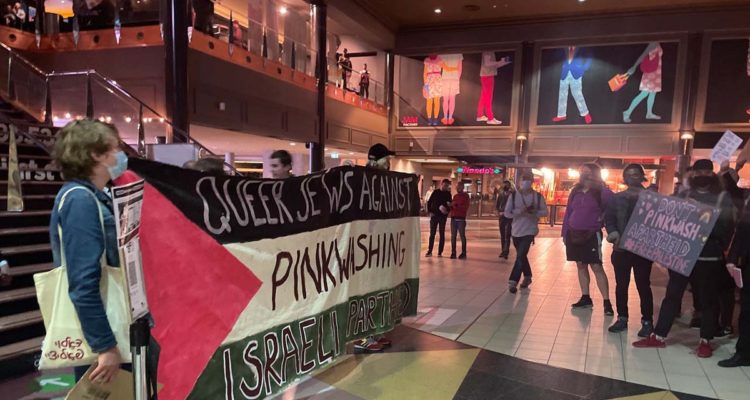 Victorian Police were called to The Jam Factory in Melbourne last night after Queer Palestinians and their allies protested outside the screening of an Israeli Government-funded film at the Melbourne Queer Film Festival that has been criticised for allegedly pinkwashing Israeli apartheid.

Queer Palestinian activist, organiser and storyteller Jeanine Hourani and others took to the streets and protested outside The Jam Factory, where the film was screened last night in response to MQFF’s decision. In footage shared on Twitter, people could be heard chanting: “Out, out, Israel, out; free, free Palestine”.

Adam Kalderon’s The Swimmer is an Israeli queer film that’s part of this year’s Melbourne Queer Film Festival program. It follows an Olympic swimmer as they juggle their feelings for a fellow male athlete and their goal to compete in the Olympic Games.

While the film doesn’t comment on the Israeli and Palestinian conflict, according to the local Queer Palestinian community, it’s a film that’s been funded by the Israeli Government in a scheme where artists aren’t allowed to say anything bad about Israel and by a director who’s previously made anti-Palestinian films about the 2012 attack on Gaza from an Israeli perspective. It’s also been accused of pinkwashing Israeli apartheid.

Pinkwashing is a term coined by Palestinians to describe how Israel promotes itself as an LGBTQIA+ safe haven in the Middle East to suggest that Palestine and Palestinians are inherently homophobic. They say it is part of a series of tactics used by the Israeli Government to further invalidate the identity and credibility of Palestine and its people.

It’s similar to the imagery of First Nations people by White Australian colonisers. Queer Jewish woman Dr. Jordy Silverstein said that from living in Australia, we should know “there’s nothing in this country that isn’t part of settler colonialism. The same applies here.”