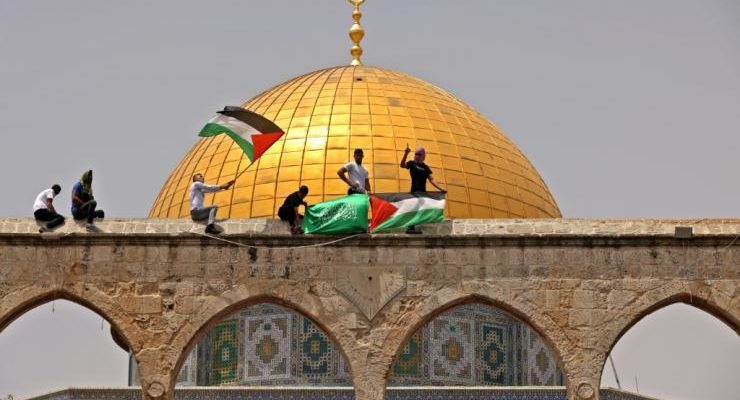 Palestinians wave the Palestinian and Hamas flags during fresh clashes with Israeli security forces in Jerusalem's Al-Aqsa mosque compound on May 21, 2021

Israel’s internal security agency announced Monday that it had uncovered a Hamas cell in recent weeks in the occupied West Bank and east Jerusalem and has arrested over 50 of the militant group’s members.

The announcement noted that the arrested Hamas members were involved in planning attacks on Israelis.

“[The militants] were involved in establishing a terror infrastructure and money, armaments, weapons and material for preparing explosives were apprehended, ” the Shin Bet said.

Hamas, a group that has controlled the Gaza Strip and adamantly opposes Israel’s existence, has been considered a terrorist group by Israel, the U.S. and the EU.

Most recently, the U.K. has moved to ban Hamas as a whole ​​to tackle anti-Semitism and protect the Jewish community.

U.K. Home Secretary Priti Patel said on Twitter that she has “taken action to proscribe Hamas in its entirety.” She is expected to push for the ban this week.

Despite the growing global condemnation of Hamas, the militant group continues to attack without mercy.

On Sunday, a 42-year-old Palestinian man who belonged to Hamas killed one and wounded four others in a shooting in Jerusalem’s Old City before Israeli police fatally shot him.

Read the article by Giulia Campos in International Business Times.