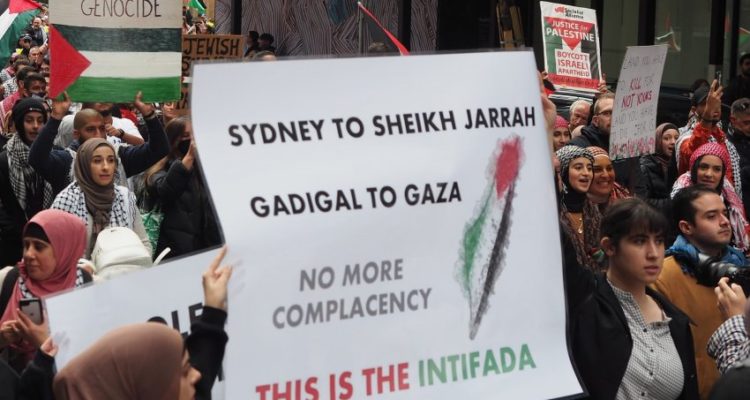 Protest in support of Palestine in Sydney. (Green Left)

This dangerous development is only the logical outcome of decades of impunity and repression against any Palestinian assembly that challenges Israel’s regime of apartheid, occupation and colonisation.

One of the groups targeted by Israeli defence minister Benny Gantz’s “terror” designation order is Al-Haq, which was founded in 1979 and is one of the oldest Arab human rights organisations.

Now Israel is applying a draconian 2016 anti-terror law for the first time, accusing Al-Haq and five other groups of operating as covert arms of the Popular Front for the Liberation of Palestine, a leftist political party and resistance organisation.

That group is banned by Israel as well as the United States and the European Union because it refuses to go along with the Oslo accords surrender – refuses to recognise Israel and renounce armed resistance.

International law recognises the legitimacy of armed struggle in anti-colonial and anti-occupation struggles against foreign domination.

Criminalising resistance groups like the PFLP serves the oppressor.

Israel has repeatedly jailed lawmaker and human rights defender Khalida Jarrar based on her membership with the PFLP without meaningful protest from Washington and Brussels.

Governments have criminalised the Palestinian movement for national liberation by designating the PFLP and other factions that reject normalisation with their oppressor as terror organisations.

Read the article by Maureen Clare Murphy in Green Left.