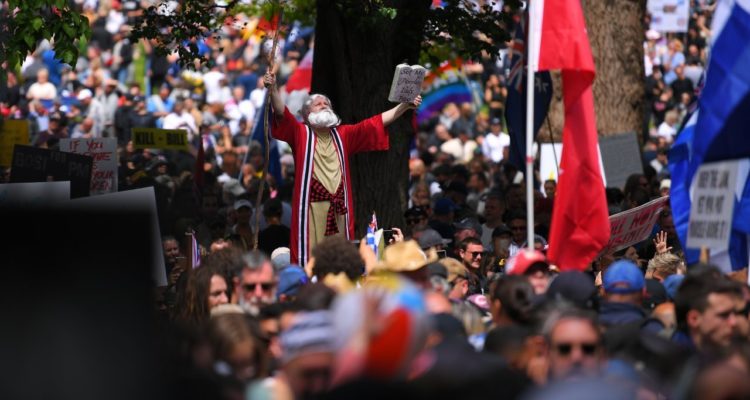 Pun times: A dispatch from the protests

You’ll have to pry their puns from their cold dead hands. Tens of thousands, at least, turned up to the “Kill the Bill” rally last Saturday and they brought their zingers with them.

Opposite Victoria’s Parliament House, where Harry Potter and the Cursed Child is running at the Princess Theatre, a woman is waving a placard that says she’s a “Prisoner of AzkaDAN”. Another placard quips “Once Andrews is jailed for treason he’ll have his own man-date every day”. It’s a riff on vaccine mandates and prison sex, if that wasn’t clear.

Even “Kill the Bill” is a word play. A truck tows a professional looking billboard, seemingly advertising Quentin Tarantino’s Kill Bill  but with Daniel Andrews substituted in for Uma Thurman. The crowd fears this bill will put too much power in the premier’s hands to crack down on their freedoms.

With girls on stilts, a bloke dressed as Moses, another with a paper bag on his head and people thrusting signs with Bible quotes, it’s hard to know where to begin. Who are these people?

A counter-rally organised by Campaign Against Racism and Fascism is characterising the event as far-right, labelling some of the organisers “actual Nazis”.

I decide one place to begin is by moseying up to those waving flags of different nations. From Croatia to Turkey to Greece to Albania, the steps of parliament look like an audience cutaway at the Eurovision Song Contest.

Alongside a trio of women in hijabs, dressed in black from head to toe, a man is holding up the flag of Lebanon. “Our scriptures tell us not to take anything that will harm our body,” he explains, when I ask why they are here. “Even so much, we’re not supposed to put on a tattoo. So, imagine taking a vaccine knowing there’s carcinogens in them.”

Read the article by John Safran in The Saturday Paper.