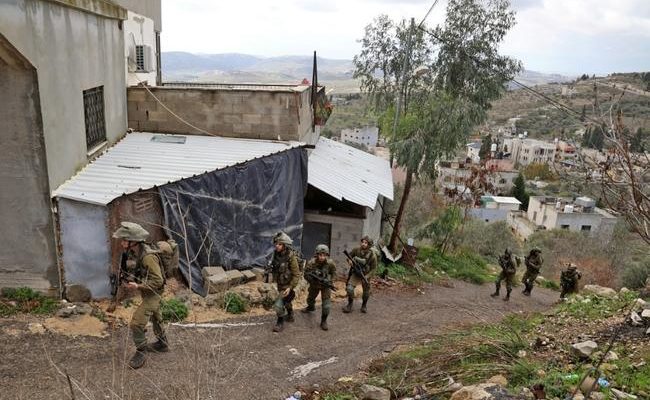 Israeli soldiers patrol the Palestinian village of Burqah, in the occupied West Bank

A protester scuffles with a member of the Israeli security forces during an anti-settler demonstration in the tense east Jerusalem neighbourhood of Sheikh Jarrah.

Israeli soldiers carried out a manhunt Friday in the occupied West Bank, a day after the army blamed Palestinians for shooting dead an Israeli settler and wounding two others.

The army, which said Palestinian “terrorists” carried out the attack, deployed three extra battalions as well as special forces.

“We will not stop until we capture the terrorists,” Kochavi, who visited the scene of the attack, added in a statement.

The victim was identified as religious student Yehuda Dimentman, 25, a married father and an Israeli settler. About 2,000 people attended his funeral on Friday in Jerusalem, an AFP journalist said.

Israel seized the West Bank in the Six-Day War of 1967. Since then nearly 700,000 Jewish Israelis have moved into West Bank and east Jerusalem settlements that much of the international community regard as illegal.

The shooting by “Palestinian assailants” as well as “several retaliatory attacks by Israeli settlers” on Friday morning are the latest of many recent incidents that highlight the volatility of the current situation, United Nations Middle East peace envoy Tor Wennesland said.

In Burqah, a village near the scene of Thursday’s shooting, an AFP reporter saw settlers hurling stones at homes, with hundreds of Palestinian residents mobilising and Israeli soldiers deployed.

Read the article in The Daily Telegraph and The Australian.