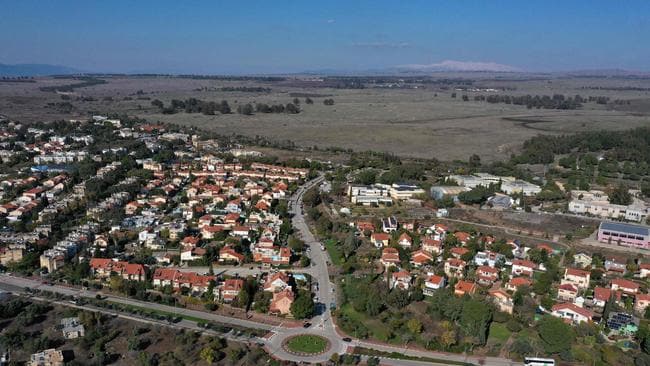 The plan aims to build 7300 settler homes in Katzrin, Israel’s main settlement in the area, and in smaller Jewish communities, over five years. (AFP)

Israel to double Jewish settlers on the Golan Heights

Israel will spend 1 billion shekels ($438m) in a bid to double the Jewish settler population in the Golan Heights, 40 years after it annexed the territory captured from Syria.

Prime Minister Naftali Bennett’s cabinet voted on Sunday in favour of a plan – which aims to build 7300 settler homes in Katzrin, Israel’s main settlement in the area, and in smaller Jewish communities, across five years – during a meeting at the Mevo Hama community in the Golan.

The expenditure on housing and infrastructure as the goal of attracting roughly 23,000 new Jewish settlers to the area, seized during the 1967 Six-Day War. The Prime Minister’s office said two new settlements were planned. “Our goal today is to double the population of the Golan Heights,” Mr Bennett said ahead of the meeting.

He was forced to leave the meeting after his 14-year-old daughter tested positive for the coronavirus, putting him into isolation, but a vote on the program went ahead after a delay.

About 25,000 Israeli settlers live in the Golan Heights, along with about 23,000 Druze, who remained on the land after Israel seized it. Israel annexed the territory in 1981, a move not recognised by most of the international community. Then president Donald Trump granted US recognition to Israeli sovereignty over the Golan in 2019.