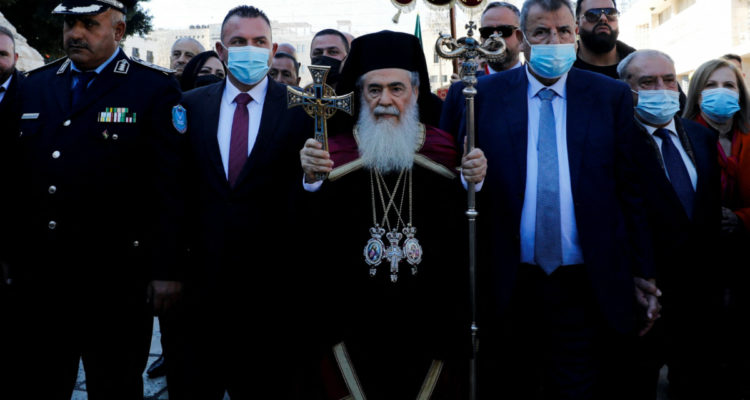 Greek Orthodox Patriarch of Jerusalem Theophilos III arrives at the Church of the Nativity to celebrate Christmas according to the Eastern Orthodox calendar, in Bethlehem in the Israeli occupied West Bank, January 6, 2022. Picture taken January 6, 2022. REUTERS/Mussa Qawasma

The Greek Orthodox Patriarch of Jerusalem has accused radical Israeli groups of threatening the presence of Christians in the holy city, in remarks that Israeli officials rejected as baseless.

In a column in the Times of London on Saturday, His Beatitude, Theophilos III, said he believed the aim was to drive the Christian community from Jerusalem’s Old City, which has sites sacred to Judaism, Christianity and Islam.

Israel captured East Jerusalem, including the Old City, along with the West Bank and Gaza Strip in a 1967 war. It annexed East Jerusalem after the war in a move that has not won international recognition.

“Our presence in Jerusalem is under threat,” the Patriarch wrote in the article, published a day after the Greek Orthodox celebration of Christmas.

“Our churches are threatened by Israeli radical fringe groups. At the hands of these Zionist extremists the Christian community in Jerusalem is suffering greatly, he said.

“Our brothers and sisters are the victims of hate crimes. Our churches are regularly desecrated and vandalised. Our clergy are subject to frequent intimidation.”

By singling out extremists as Israeli, Theophilos’s criticism was more personal and trenchant than that of a collective statement issued by the heads of other churches in Jerusalem before Christmas.

Their statement spoke of “frequent and sustained attacks by fringe radical groups” but stopped short of identifying them as Israeli.

Read the article by Stephen Farrell in Sight Magazine.