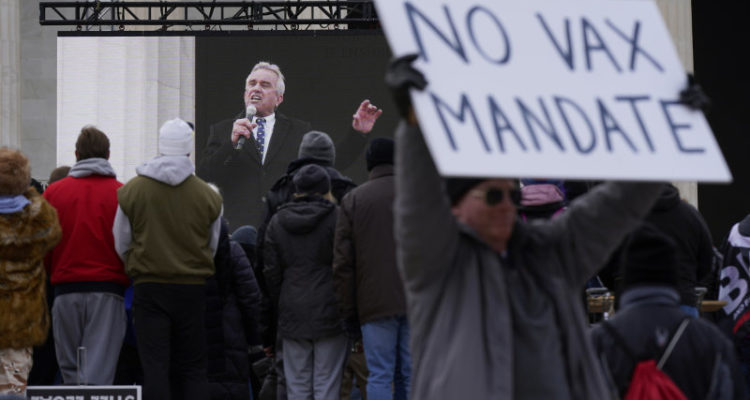 Robert F. Kennedy jnr, is broadcast on a large screen as he speaks during an anti-vaccine rally in front of the Lincoln Memorial in Washington. (AP)

Providence, Rhode Island: Anti-vaccine activist Robert F Kennedy jnr was “reckless” and “outrageous” when he suggested things are worse for people today than they were for Anne Frank, the teenager who died in a Nazi concentration camp after hiding with her family in a secret annex in an Amsterdam house for two years, the US Holocaust Memorial Museum said.

“Making reckless comparisons to the Holocaust, the murder of six million Jews, for a political agenda is outrageous and deeply offensive. Those who carelessly invoke Anne Frank, the star badge, and the Nuremberg Trials exploit history and the consequences of hate,” the museum said Monday in a statement posted to Twitter.

A spokesman said the museum made the statement in response to Kennedy’s speech and other recent incidents of people invoking the Holocaust for political purposes. The museum also pointed out that Anne Frank was one of the 1.5 million children who died during the Holocaust.

During a Sunday rally in Washington organised by his anti-vaccine nonprofit group Children’s Health Defence, Kennedy complained that people’s rights were being violated by public health measures that had been taken to reduce the number of people sickened and killed by COVID-19. He said the nation’s leading infectious disease doctor, Anthony Fauci, was orchestrating “fascism”.