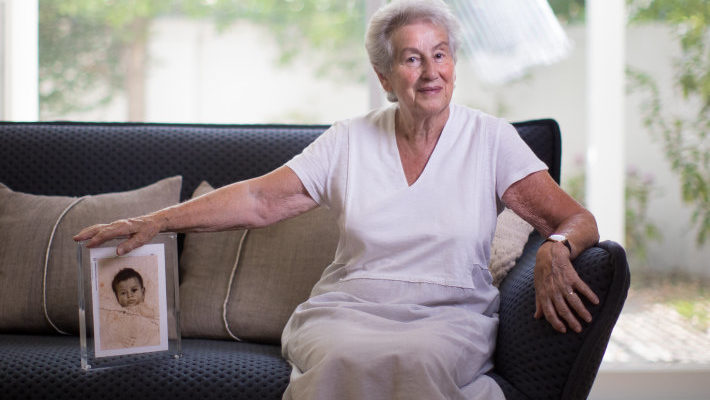 Holocaust survivor Nina Bassat, with a photograph of herself as a baby in 1939. (Simon Schulter)

Nina Bassat can’t recall ever seeing anyone shot, but she supposes she must have done: even more than 70 years after World War II, she finds herself freezing whenever she hears the sound of a balloon popping.

The body, she says, sometimes holds memories our minds cannot bear to.

As survivors enter their 80s and 90s and first-hand memories of the Holocaust recede, new research to be released on Thursday to coincide with International Holocaust Remembrance Day shows one-quarter of Australians have little awareness of the Holocaust, except for its existence.

Deakin University’s Steve Cooke, one of the project’s lead authors, said it was important not to lose sight of the Holocaust in the broader context of human rights abuses.

“A clear and thorough understanding of the Holocaust can help educators and students understand other genocides, mass atrocities and human rights violations, so understanding the Holocaust helps us reflect on those other difficult histories but also our own history too,” Associate Professor Cooke said.

Now 82, Mrs Bassat was born in Poland to a Jewish family in 1939 – the year war was declared in Europe.

Mrs Bassat and her mother were interned in the Lwow ghetto in Poland for almost two years before escaping and living in hiding for two years.

Read the article by Bianca Hall in The Sydney Morning Herald.