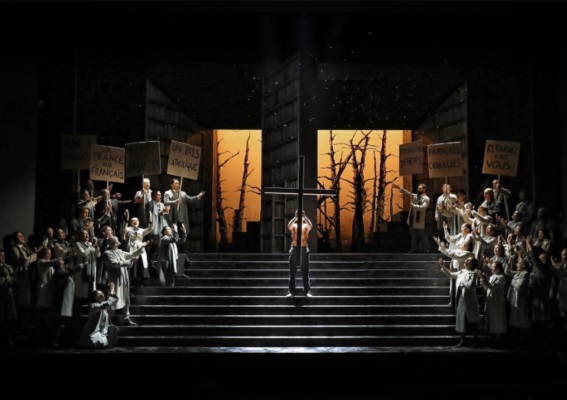 French composer, Fromental Halévy wrote 40 operas among many other works, but by far his greatest success was La Juive. When it was first performed in Paris in 1835, La Juive (The Jewess) received enthusiastic accolades and quickly became a popular fixture in opera house repertoires around the world.

The original libretto, by the aptly named Eugène Scribe, sets the story in Constance, Germany during the Council of Constance (1414 -1418), an historically significant time in the Roman Catholic Church. The council resolved the rather awkward Papal Schism which saw two opposing pretenders claiming to be the legitimate Pope. The council also condemned religious reformer, Jan Hus, as a heretic and burned him at the stake. It didn’t stop his followers, the Hussites, from engaging in five crusades, known as the Hussite Wars, between 1420 and 1431 – all of which they won.

Emperor Sigismund ruled a big chunk of geography at the time, later adding the title, Holy Roman Emperor to his credentials. To be anything other than Roman Catholic during this period was dangerous, often mortally.

All of this history is referenced in La Juive, and is intrinsic to its themes, so reframing the narrative in the 1930s as this production has done, is a bold idea. But it works.

Eléazar (Diego Torre) a Jewish jeweller and his adult daughter, Rachel (Natalie Aroyan) live on the margins of a fiercely Catholic society. Secretly, however, Rachel is having a forbidden relationship with a man she knows as Samuel whom she believes is Jewish but who is in fact, Prince Leopold (Francisco Brito), very much Catholic and very much already married. His unsuspecting wife, Princess Eudoxie (Esther Song), commissions a special piece of jewellery from Eléazar and unwittingly meets her husband’s mistress, Rachel.

Meanwhile, the uncompromising Eléazar transgresses some Catholic rules and suffers the wrath of the angry mob. He is beseeched by Cardinal Brogni (David Parkin) to repent but Eléazar stands firm, fuelled by some past incident involving Brogni.