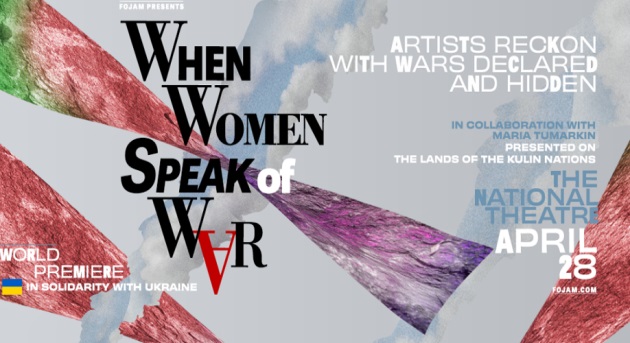 Musicians, writers, performers and storytellers reckon with war in a theatrical collaboration at The National Theatre in Melbourne.

Maria Tumarkin, co-curator of When Women Speak of War in the Sydney Morning Herald:

Art is not the panacea, but it might be the best antithesis to propaganda we have. It teaches us not to turn away. It disarms us. It brings us into close contact with shame and responsibility. It shows cynicism as cowardly because it is. It shows various forms of appeasement as disastrous because they are. Forget “never again!“. It’s gone. But our ability to witness, remember, refuse lies, resist violence, hold each other close, is not.

On Thursday 28th April at The National Theatre Melbourne and streamed live online, the Festival of Jewish Arts and Music (FOJAM) presents When Women Speak of War: Artists Reckon with Wars Declared and Hidden, co-curated with Ukrainian Jewish-Australian writer and cultural historian Maria Tumarkin, who was born and raised in Kharkiv.

With a palpable sense of urgency, a line-up of outstanding artists grapples with the trauma of genocide and war across distinct but deeply interrelated contexts.

Conceived of well before the invasion of Ukraine, this event has become an act of resistance: to the annihilation of nations, cultures, peoples with unique histories, but also to ideology, cynicism, compassion fatigue and dehumanisation in its many guises.

Read the article on Aussie Theatre.