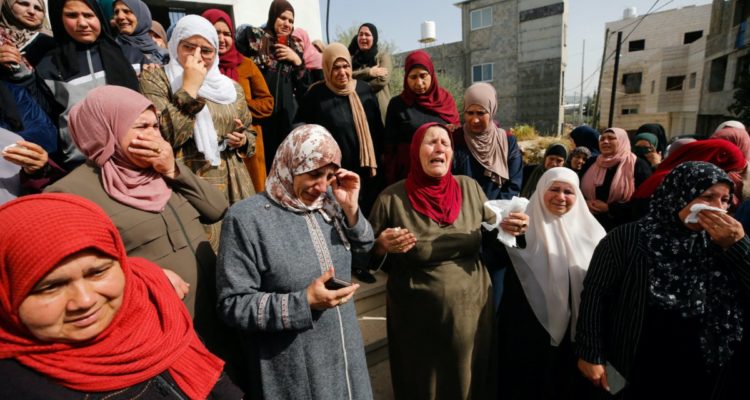 People react during a funeral of Palestinian woman Ghada Sabatin, who medics said was killed by Israeli forces, in Husan in the Israeli-occupied West Bank on 10th April 10, 2022. (Reuters/Mussa Qawasma)

Israel and West Bank on edge after more bloodshed

Israeli forces killed two Palestinian women on Sunday after one ran towards troops and the other stabbed a soldier in separate incidents in the occupied West Bank, Israeli security officials said.

With violence surging after a string of deadly Arab attacks in Israel, a Palestinian man was killed by Israeli soldiers during what local residents said were confrontations with stone-throwers near the West Bank town of Bethlehem, the Palestinian health ministry announced.

The bloodshed has coincided with the start of the Muslim holy month of Ramadan, when Israeli-Palestinian violence has erupted in the past and, last May, spiralled into an 11-day war between Gaza militants and Israel.

In Bethlehem, no weapon was found on the body of a Palestinian woman who was shot and killed after she ignored soldiers’ calls and warning fire to stop running towards them, the Israeli military said, adding it had begun an investigation.

Hours later, a Palestinian woman armed with a knife was shot dead after she slightly wounded a paramilitary border policeman in Hebron, outside the Tomb of the Patriarchs, which Muslims call al-Ibrahimi mosque, Israeli security officials said.