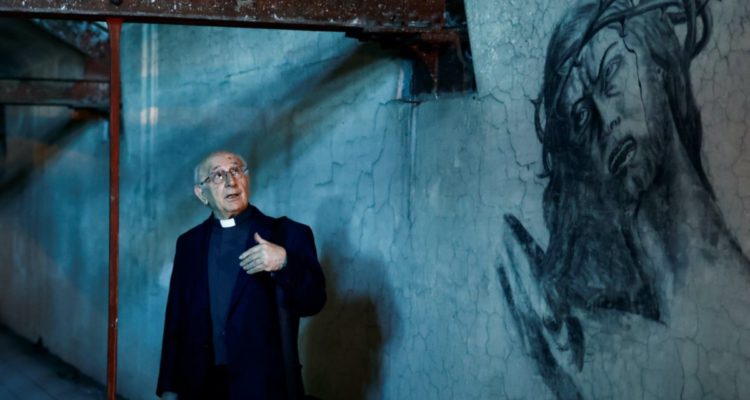 Father Ezio Marcelli, 90, looks at a graffiti that he discovered in the attic of the San Gioacchino church, where 35 people hid over nine months during the Nazi-fascist occupation of Rome between 1943-1944 and left their testimony of isolation and suffering through graffiti on the walls, in Rome.. (Reuters/Yara Nardi)

The church of San Gioacchino in Rome is full of frescoes, mosaics, and intricate stained glass windows, but perhaps its real masterpieces are charcoal wall drawings hidden away in its attic.

The drawings were done by one of 35 men – including Jews, anti-Fascist Christians, and military defectors – who were hidden in the attic during the Nazi occupation of Rome in World War II, some for as long as six months.

Father Ezio Marcelli discovered the drawings in 1984, 40 years after allied soldiers liberated Rome from Nazi occupiers in June, 1944. He remembered hearing from an older priest that people were hidden in the church during the war and began looking in the parish archives for clues.

“I managed to find this hiding place. We made this extraordinary discovery,” he said. “I was very emotional.”

“The meaning of what happened here, of people being persecuted, hunted down to be sentenced to death, still has a real significance today,” Marcelli said.

Despite his 90 years, Marcelli fearlessly climbs the external spiral staircase leading to the attic.

“We must always be vigilant and careful so that no one can ever again do such evil actions,” he said, taking visitors through a secret passage that was once bricked up to conceal the people inside from possible Nazi raids.