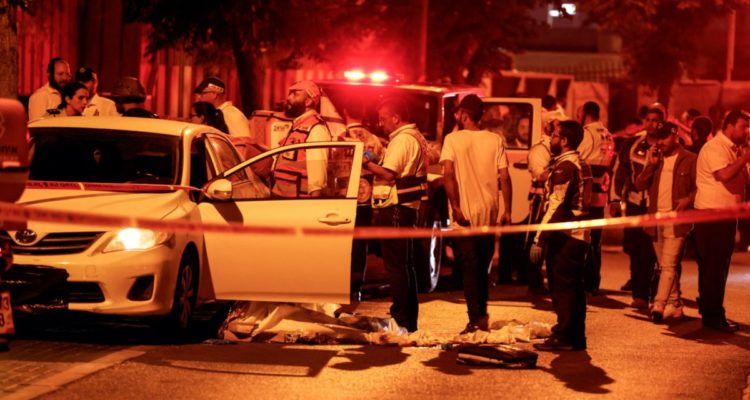 Israeli Security and rescue personnel work at the scene following an incident in Elad. (Reuters/Ammar Awad)

At least three people were killed in what police suspect was a Palestinian attack in the central Israeli city of Elad on the country’s independence day.

Police set up roadblocks to try to catch the assailants who fled the scene, about 15 kilometres from Tel Aviv. On television, Elad’s mayor urged residents to stay indoors while security forces were still operating.

Health officials said three people were killed and two others were being treated with serious slash wounds.

“The joy of Independence Day was cut short in an instant. A murderous attack in Elad that shocks the heart and soul,” Israeli Foreign Minister Yair Lapid posted on Twitter. “We will not give in to terror.”

Palestinian President Mahmoud Abbas condemned the attack. The official Palestinian news agency WAFA quoted him as saying “the killing of Palestinian and Israeli civilians will only lead to more deterioration of the situation.”

There have been a spate of Arab street attacks in Israel in recent weeks.

Prior to Elad, Palestinians and members of Israel’s Arab minority had killed 15 people, including three police officers and a security guard, in attacks in Israel and the West Bank that have mostly targeted civilians.

Israel has responded with arrest raids in Palestinian towns and villages which have often sparked clashes and brought the number of Palestinians killed by Israeli forces since the beginning of the year to at least 40.

The casualties include armed members of militant groups, lone assailants and bystanders.

Read the article by Rami Amichay and Ammar Awad in Sight Magazine.