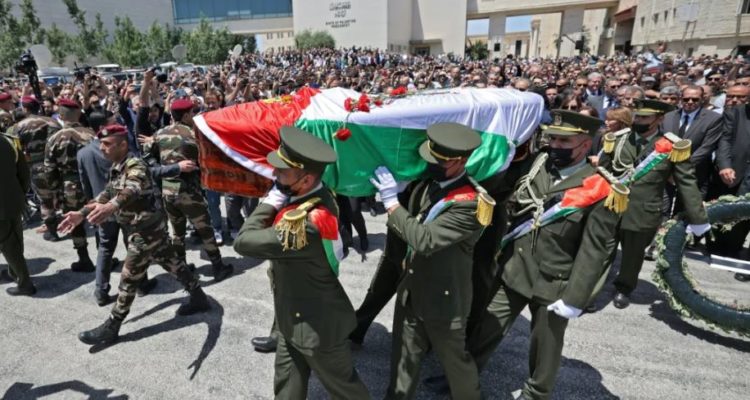 Jmedia Manager
Print
May 13, 2022 16
Thousands of Palestinians on Thursday honoured Al Jazeera journalist Shireen Abu Akleh across the occupied West Bank and annexed east Jerusalem, a day after she was shot dead during an Israeli army raid.

Israel and the Palestinians have traded blame over the killing of Palestinian-American Abu Akleh, 51, a veteran of the Qatar-based network’s Arabic service, during clashes in the Jenin refugee camp.

In a sign of Abu Akleh’s stature among Palestinians, she received what was described as a full state memorial at the Ramallah compound of president Mahmud Abbas.

Many held flowers, wreaths and pictures of the slain journalist, who has been widely hailed for her bravery and professionalism through her coverage of the conflict.

“This crime should not go unpunished,” said Abbas, adding that the PA held Israel “completely responsible” for her death, and had “rejected” an Israeli proposal for a joint investigation.

Draped in a Palestinian scarf, mourner Tariq Ahmed, 45, described the death as a “tragedy for all the nation”, comparing his grief to that he felt at the funeral of Palestinian leader Yasser Arafat.

Another mourner, 45-year-old Hadil Hamdan, said that “Shireen was part of our lives”, adding that “her voice entered every home, and her loss is a wound in our hearts”.