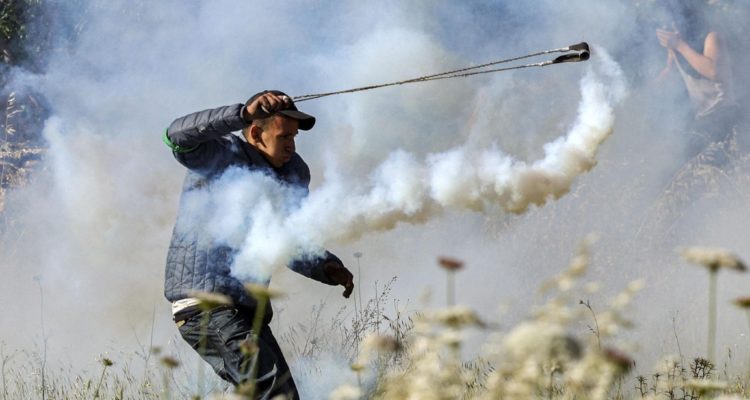 A Palestinian protester uses a slingshot to hurl back a tear gas canister at Israeli security forces during clashes near Ramallah on May 15. (AFP)

He has been quiet since gaining the Labor leadership, but for years Anthony Albanese was a vigorous critic of Israel, the Middle East’s most robust democracy.

A year before Anthony Albanese’s elevation to the Labor leadership, he lashed out at Israel, claiming it had acted disproportionately when defending its citizens from attacks from Gaza. He demanded the Coalition government explain why it voted against a UN move to launch an investigation into Israel’s “indiscriminate use of force” against Palestinians.

Neither Australia nor the US supported the politically motivated investigation by the discredited UN Human Rights Council. Nor did then Labor leader Bill Shorten.

This was simply the latest inquiry from a UN body that is routinely condemned for its obsession with the Jewish state as it turns a blind eye to human rights atrocities in China, Saudi Arabia, Iran, Afghanistan and Russia.

But Albanese spoke provocatively about the need for an inquiry in comments that broke with Australia’s bipartisan position of supporting Israel in one-sided international forums.

He has said he strongly supports Israel’s right to exist, objects to anti-semitism and opposes the Boycott, Divestment and Sanctions movement.

But the Australian has unearthed stridently anti-Israel rhetoric and pro-Palestinian advocacy from Albanese spanning almost two decades, culminating in 2018, before a pause that came ahead of the 2019 federal election and his ascendancy to Labor leadership.