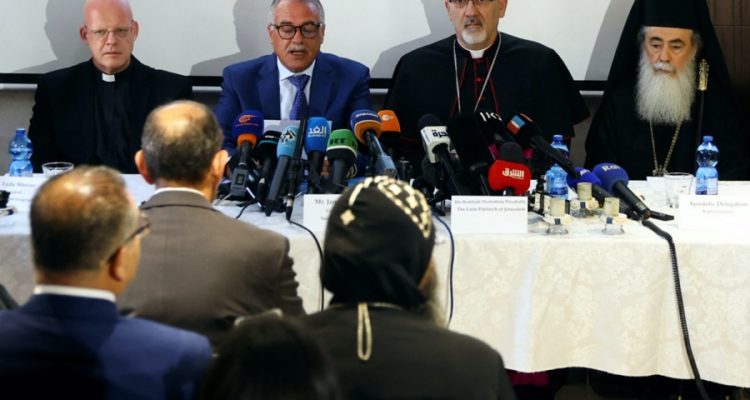 Spiritual leaders attend a news conference regarding the funeral of Al Jazeera reporter killed during an Israeli raid in Jenin. (Reuters/Ronen Zvulun)

An organisation representing 12 Christian denominations on Monday condemned an Israeli riot police charge at the funeral of a Palestinian Christian Al Jazeera journalist, describing the actions as a violation of freedom of religion.

Mourners, some carrying Palestinian flags, were escorting the coffin of Shireen Abu Akleh, a dual US citizen, from the convent-run Saint Joseph Hospital to the Greek-Melkite Cathedral of the Annunciation of the Virgin when police charged.

Friday’s incident, during which baton-wielding officers beat Abu Akleh’s pallbearers, was broadcast live globally and renewed the anger at the reporter being shot dead during an Israeli military raid in the occupied West Bank.

The police actions constituted an “invasion and disproportionate use of force…[and] a severe violation of international norms and regulations, including the fundamental right of freedom of religion”, a hospital statement quoted the Christian Churches of the Holy Land group as saying.

While blaming violence by “hundreds of rioters” for the confrontation, police said they were investigating the incident.

Israel and the Palestinians remain at loggerheads over Abu Akleh’s shooting in Jenin on Wednesday.

The Palestinians accuse Israel of assassinating her and have called for an international response. Israel has denied targeting her, saying she may have been shot accidentally by a soldier or a Palestinian gunman as they exchanged fire.

Read the article by Mustafa Abu Ganeyeh in Sight Magazine.