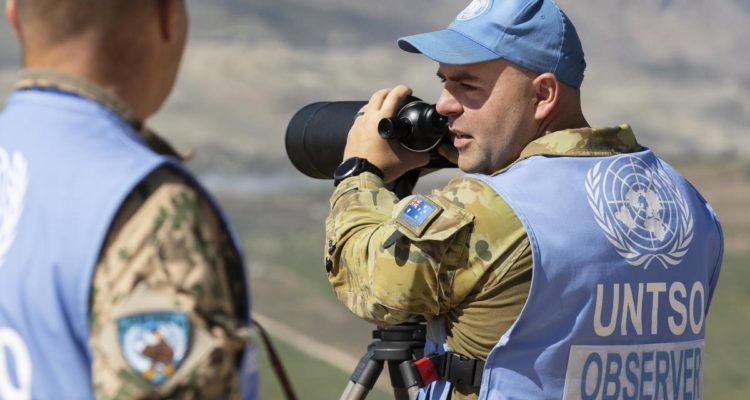 A member of Team Eagle working in Golan on the Israeli-Syrian border, Captain Whiteley is one of nine members who conduct mobile patrols and static operations as part of Operation Paladin, the ADF’s contribution to the UN Truce Supervision Organisation.

The teams watched for any activities that are, or could lead to, a violation of the 1974 Agreement on Disengagement between Israel and Syria.

“There are numerous civilians in the villages we monitor, which enables us to observe the pattern of life in the area,” Captain Whiteley said.

“When something changes, it allows us to quickly focus in and see if it is anything we need to report.

“The situation in the Golan is relatively calm, but it can change at a moment’s notice.

“For example, in February, rockets were fired from the Israeli Golan side into the Syrian side, destroying numerous buildings within a village.”

Patrolling anywhere from 50 to 200km a day, the military observers work in teams of a minimum of two from differing countries to maintain impartiality.

There are numerous patrolling sectors, with each made up of different areas that the Israeli Defence Force operate out of. This covers both permanent and temporary facilities, where training and operational activity is conducted.

“As a patrolling team, we move freely through all the different sectors,” Captain Whiteley said.

“Should we observe any presumed violations we are able to increase the observation and therefore the awareness for the commanders on the ground.

“An example is any military equipment that is unauthorised to be in the area of limitation, such as surface-to-air missiles, which are a violation of the 1974 agreement.”