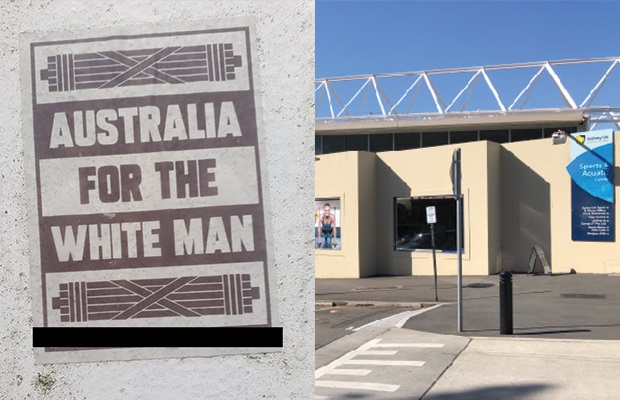 A neo-Nazi poster has been found on a pillar near Sydney University Sports and Aquatic Centre (SUSAC) and Abercrombie Business School.

The poster reads ‘Australia for the White Man’ in large text and advertises the name of the far-right group responsible for its creation. The slogan is bordered by two fasces commonly associated with fascist movements, but represented a bundle of wooden rods in Roman heraldry.

The group seemingly responsible also produced similar white supremacist materials that appeared on campus in 2020. The organisation formed out of the Lads Society and Antipodean Resistance, both neo-Nazi groups that spread racist and homophobic messaging on Australian university campuses in 2017 and 2019.

These incidents form part of the organisation’s long-term strategy to propagate their extremist Neo-Nazi ideology in activist spaces.

The group’s website espouses typical neo-Nazi iconography, including the white supremacist 14 words and the Great Replacement conspiracy theory, which was recently associated with deadly racist violence in the US.

In a statement to Honi, SRC Ethnocultural Officer Misbah Ansari strongly condemned the incident, calling for USyd to open an investigation into the posters to ensure the safety of the student community.

“This is a sign of active violence on Indigenous land and also an unsafe sign for other people of colour who reside and study around campus,” Ansari said. “Anything less than a concrete investigation by the University is a sign of complicit behaviour and callousness towards its people. White supremacy kills.”

Read the article by  Khanh Tran and Ellie Stephenson in Honi Soit.