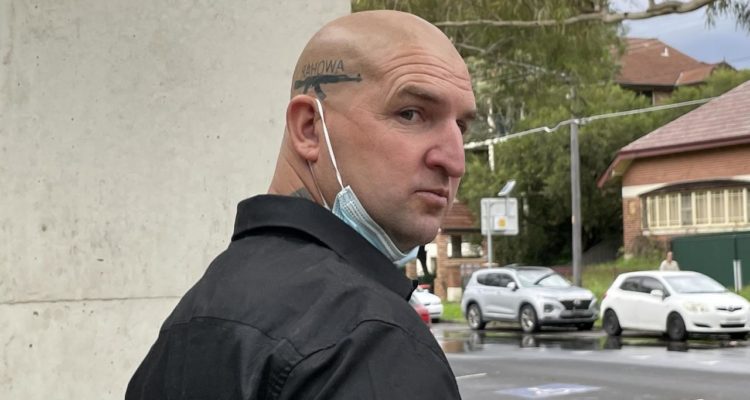 An alleged Nazi-sympathiser has faced court over intimidation and affray charges towards a Black Lives Matter activist. Find out what happened in court.

An alleged neo-Nazi extremist who has been accused of intimidating and causing a Black Lives Matter activist to be fearful in his Arncliffe home has fronted court.

Desmond Liddington – who has distinctive tattoos on his body and bald head, including an AK-47 gun with the word RAHOWA – appeared in Sutherland Local Court on Tuesday for a brief mention of his matter.

RAHOWA can refer to “racial holy war” which is a neo-Nazi concept of race war.

Liddington was charged with stalking/intimidation and affray charges after he and two others went to the home of Black Lives Matter activist Padraic ‘Paddy’ Gibson on December 4, 2021 in Arncliffe and used unlawful violence towards him.

Court documents state the offence was committed at the address of a left-wing activist at the time when the resident’s wife was at the property.

They also revealed investigators had secured CCTV footage which allegedly depicts Liddington at the time of the incident.

The documents further state Liddington has distinctive tattoos which are visible in the footage and during a search warrant upon his premises, clothing matching that depicted in the CCTV was seized.