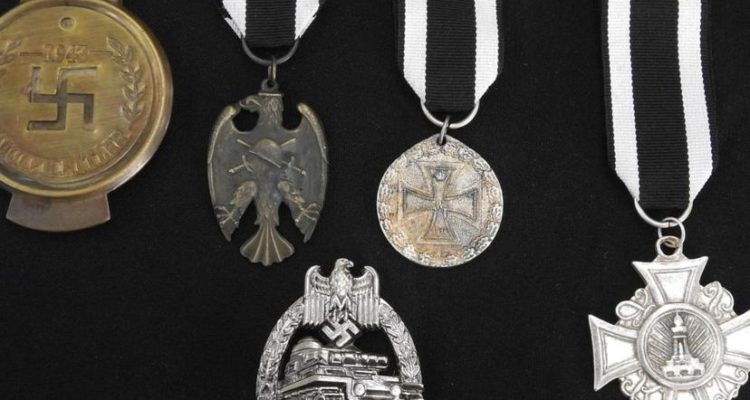 Nazi memorabilia is set to go under the hammer at a Gold Coast auction house just days after the Queensland government announced plans to ban the Nazi swastika.

Six lots of Nazi items are being sold by Danielle Elizabeth Auctions on Saturday from a collector’s estate, attracting outrage from the Jewish community.

The Nazi memorabilia up for auction includes various badges, an Adolf Hitler support clip, a Luftwaffe general’s set of rank boards and collar tabs, and a general’s cockade and wreath.

Some of the descriptions under the items include “these sure look good and original”, “Nazi militaria collectibles folks!” and “these are very impressive and in pretty good condition”.

Danielle Elizabeth has continually come under fire for selling Nazi items, including as recently as last month.

Anti-Defamation Commission chair Dvir Abramovich said no one should profit from the proceeds of crime.

“This profiteering from the proceeds of history’s darkest crime is beyond sickening,” Dr Abramovich said in a statement to NCA NewsWire.

“If Danielle Elizabeth took the time to think about the 1.5 million children murdered by the Nazis, perhaps they would twice about trafficking in these instruments of death.”

Dr Abramovich went on to condemn the sale of these items and those who bought them.

“Imagine the anguish Holocaust survivors must be feeling right now. Anyone offering these cursed, bloodstained items is desecrating the memory of the victims and should be ashamed,” he said.

Read the article by Hamish Spence in Perth Now.