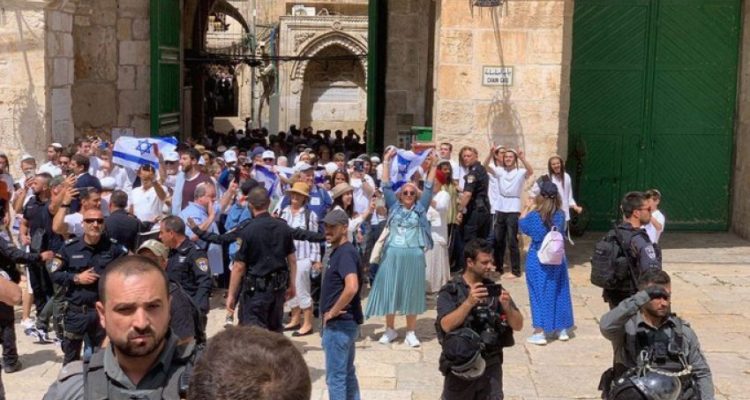 Israeli settlers at the entrance to al-Aqsa mosque. (@alaqsa/twitter)

Thousands of Israeli settlers stormed the al-Aqsa mosque in occupied East Jerusalem on May 29. Settlers also attacked Palestinians in different parts of the city during the so-called annual “March of the Flags”, held to celebrate Israeli occupation of the city.

Israeli security forces allowed nearly 70,000 settlers to carry out the march through the old city despite Palestinian objections. The settlers marched with Israeli flags and shouted provocative slogans such as “Death to Arabs”. They also called for the destruction of Palestinian villages.

Palestinians have alleged that settlers were deliberately allowed to enter the al-Aqsa compound by the occupation forces. The settlers stormed the mosque compound through the Damascus gate and raised Israeli flags inside the compound. Some of them were seen praying inside in complete violation of the existing arrangements. The settlers were led inside al-Aqsa by ultra right-wing Member of Knesset (MK) Itamar Ben Gvir.

Opposing the decision to allow the march inside the old city, hundreds of Palestinians came out in the streets defying the Israeli security forces. They shouted slogans against the occupation and waved Palestinian flags.

Read the article from Peoples’ Dispatch in Green Left.