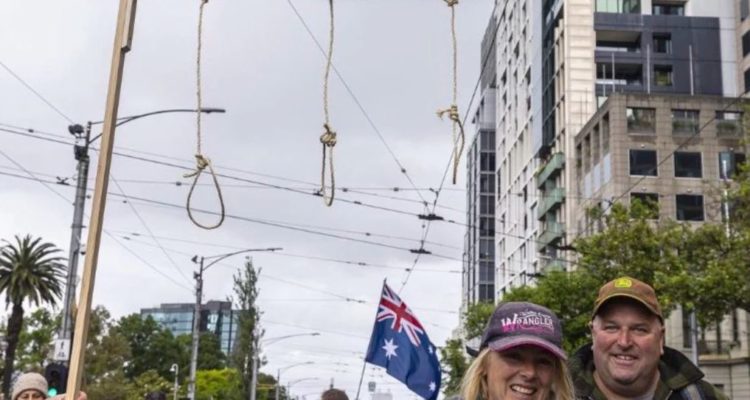 Gallows at a ‘freedom’ rally in Melbourne last year (Twitter)

Australian authorities have had a “myopic” focus on Islamist extremism since 9/11, experts have lamented, warning that it has come at the expense of identifying the rise of far-right extremism.

A Victorian parliamentary inquiry is investigating right-wing nationalism, including how the COVID-19 pandemic accelerated the movement and acted as a breeding ground for recruitment. The hearings, which kicked off on Tuesday, were told children as young as 10 were being radicalised by neo-Nazis.

Liberty Victoria president Michael Stanton said that while the threat of far-right extremism was real and needed to be addressed, his organisation was concerned about encroaching on broader human rights and civil liberties in a bid to combat extremism.

“We need to make sure that in responding to those confronting scenes in the Grampians, whether it be Nazi salutes, displays of the swastika or the erection of gallows outside parliament, that we do not have a legislative response that throws the baby out with the bathwater,” he said.

“Sometimes that involves tolerating speech that we find offensive or humiliating.”

Stanton also said that while Islamist extremism continued to pose a threat, Australian authorities’ single-minded focus on it since 9/11 had paved the way for right-wing nationalism to fester undetected.

“There has been a myopic focus on Islamist extremism over the past 20 years in Australia at the cost, in our view, of focusing on other areas, including the emergence of far-right or neo-Nazis and the danger they present to the community,” he said.