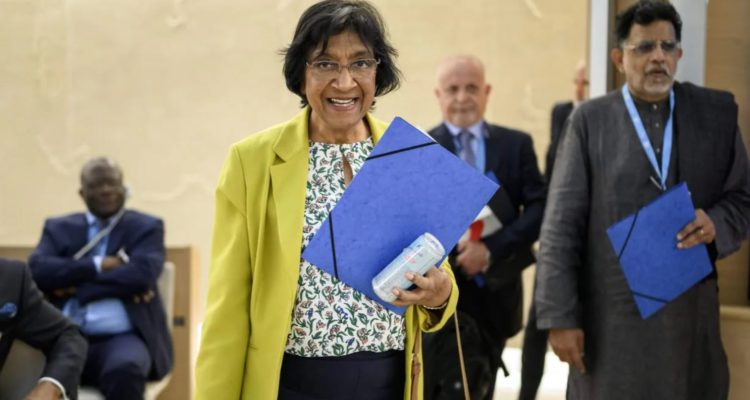 The appointment of Navi Pillay to head the United Nations Independent International Commission of Inquiry on the Occupied Palestinian Territory, including East Jerusalem, and Israel, ‘hinted at the anti-Israel claptrap these reports are clearly intended to be’. (AFP)

Israel and the UN: How the world’s only Jewish state has been scapegoated

Australia stands up for human rights, and the pursuit of human rights demands consistency and fairness for all.

This was the message Australia’s ambassador to the UN in Geneva, Amanda Gorely, delivered on Tuesday at the opening of the 50th session of the UN Human Rights Council, as she reiterated Australia’s continuing opposition to that body’s recently launched, unprecedented permanent commission of inquiry into Israel.

“We do not support the proposition that Israel is the only country that is a permanent item on the HRC agenda, which is why … we retain our fundamental concerns about the nature of the commission of inquiry.”

Australia’s statement dovetailed with a substantively similar communique by the US, co-signed by 21 other countries including Canada, Britain and Germany (so similar that some have raised the obvious question as to why Australia didn’t simply sign on ourselves), that went to the heart of why disproportionate focus on Israel discredits the work of the UNHRC.

These are rebukes that the UNHRC should take notice of, from countries that champion human rights.

Naturally, in theory, the UNHRC should be part of any strategy that improves human rights globally. In practice, however, it has been part of the problem, serving as a convenient refuge for countries with some of the worst human rights records to exploit from within and shield themselves from scrutiny.

Read the article by Ahron Shapiro in The Australian.