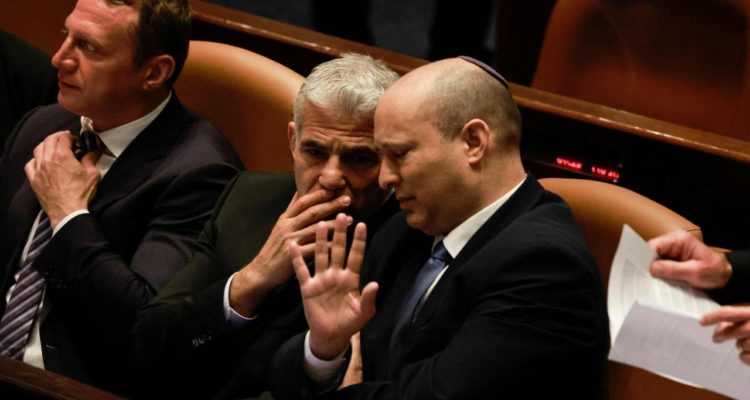 Yair Lapid, right, and Naftali Bennett confer in the Knesset on Thursday. (AFP)

Why is Israel headed to its fifth election in four years?

Israeli MPs have voted to dissolve parliament and hold new elections on November 1, the country’s fifth in less than four years.

Israeli Foreign Minister Yair Lapid, a centrist, was expected to ­become caretaker prime minister at midnight on Friday under a coalition agreement.

Mr Lapid and departing prime minister Naftali Bennett joined forces last year to unseat Benjamin Netanyahu, who had been in office since 2009, but their coalition lasted only a year.

New elections give Mr Netanyahu a chance to regain power. Public opinion surveys last week show that the former prime minister’s Likud party is likely to win the most seats in the Knesset, and Mr Netanyahu – who is on trial for corruption charges – remains popular with voters on the Israeli right. But his camp is likely to fall short of a clear majority.

Mr Bennett, 50, and Mr Lapid, 58, announced their decision on June 20 to hold a vote to dissolve parliament. This came about a year after they formed a coalition of eight parties from across Israel’s political spectrum to oust Mr Netanyahu, 70, from power.

The decision to call elections followed a turbulent few months for the coalition, whose deep ideological differences created an unwieldy alliance. Members clashed over policies related to West Bank settlements, Palestinians and questions of religion and state.

Controlling just 61 of 120 seats in the Knesset from its outset, the shaky coalition struggled to pass basic legislation after it lost its majority in April when a MP from Mr Bennett’s Yamina party resigned. Earlier in June, another Yamina MP, Nir Orbach, also stopped voting with the coalition.

Read the article by Dov Lieber and Yardena Schwartz in The Australian (from The Wall Street Journal).