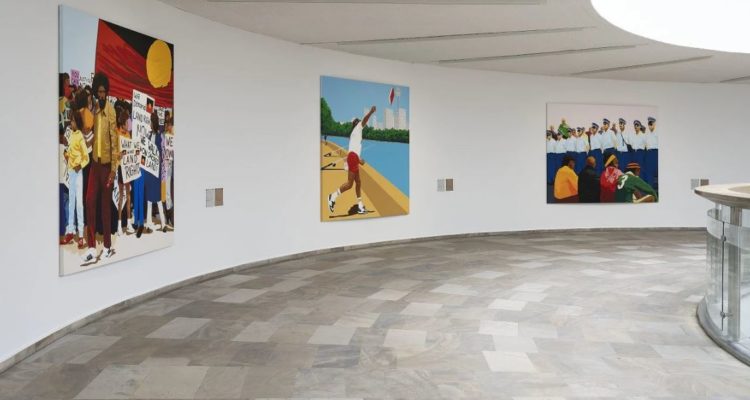 Installation views from documenta fifteen of the works of Richard Bell. (Nicolas Wefers)

As the origins of documenta are rooted in soft power, it is seldom without political controversy. This iteration was overshadowed by allegations of anti-Semitism that stemmed from the inclusion of the Ramallah-based Khalil Sakakini Cultural Center in the artistic team and an exhibition by Palestinian collective The Question of Funding. A local activist group alleged that both groups had connections to the Boycott, Divestment and Sanctions (BDS) movement. In April, anti-Islam stickers were posted on the walls of one venue. More disturbingly, three weeks before the opening, WH22 – where The Question of Funding was set to exhibit – was broken into and vandalised with far-right graffiti.

In a public letter published in May, ruangrupa vehemently denied the claims that participating artists were connected to the BDS movement, saying the allegations included multiple factual inaccuracies. Shortly after documenta opened, however, a work unrelated to the original allegations – Indonesian collective Taring Padi’s mural, People’s Justice (2002) – was removed from display in the central Friedrichsplatz because it depicted anti-Semitic tropes.

The mural was condemned by the German government, documenta’s primary funder, and documenta has committed to undertaking a full investigation. While Taring Padi intended to express the struggle of living under the Suharto regime, ruangrupa and the artistic team acknowledged in a series of public apologies that the inclusion of anti-Semitic imagery in the 20-year-old work was a clear oversight.

Read the article by Laura Phillips in The Saturday Paper.