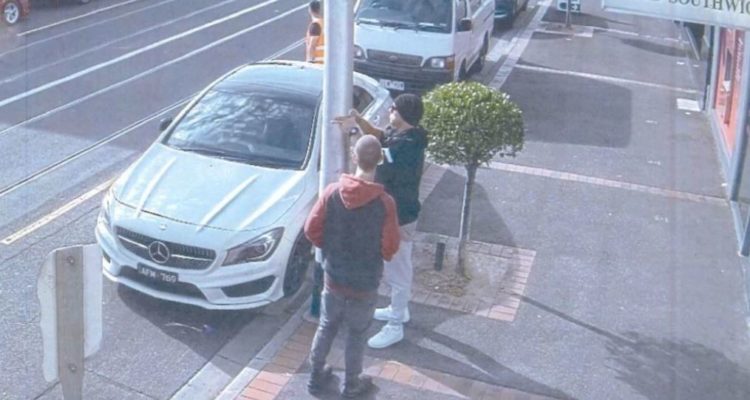 CCTV footage captures Jimeone Roberts and another man attaching a swastika sticker to a pole in Caulfield on May 12. (VIC Police / Moorabbin Magistrates’ Court)

Man who displayed swastikas avoids jail by ‘an absolute whisker’

A magistrate has slammed as “disgusting, vile and repugnant” the actions of a man who targeted a Melbourne suburb with more than 50 swastika stickers the day after the Victorian government introduced legislation to criminalise public use of the hate symbol.

Jimeone Roberts, 29, was on Monday convicted and ordered to complete 200 hours of unpaid community work after he pleaded guilty to public nuisance in Moorabbin Magistrates’ Court. Police say Roberts is affiliated with the Australian far-right organisation National Socialist Network.

Police say Roberts and Jack Darren Bell plastered the adhesives of the swastika throughout Caulfield, a suburb with a large Jewish population, about 10am on May 12.

That was one day after the Andrews government announced it would criminalise the Nazi symbol by introducing specific offences and penalties of up to one year in jail and fines of up to $22,000. The legislation had bipartisan support.

At the time of the announcement, the government said the laws wouldn’t come into effect for one year, but the May 12 incident was a factor in the government later reducing that to six months.

The court heard Roberts and Bell were seen attaching swastika stickers to the front of businesses, community organisations and the office of Caulfield MP David Southwick, who is Jewish, as well as onto poles in Caulfield Park.