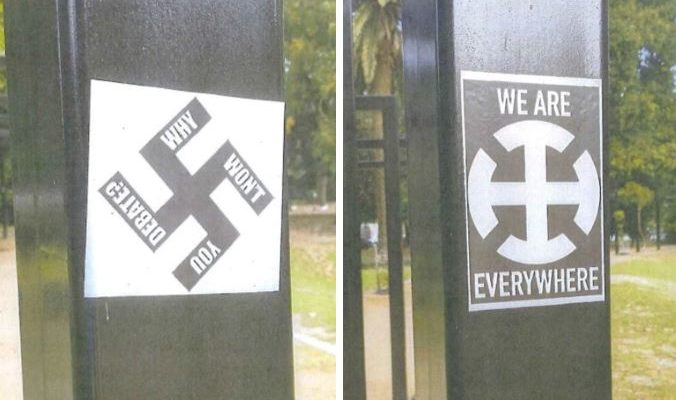 One of the swastika posters platered in Caulfield. (L) Another neo-Nazi symbol that was distributed. (R)

The office of Jewish MP David Southwick was plastered with anti-Semitic posters by a neo-Nazi who slapped dozens of “vile” symbols across Caulfield — but avoided jail.

A neo-Nazi has been blasted for “one of the most disgusting, vile, repugnant acts” after he was caught plastering dozens of anti-Semitic posters across suburban streets.

CCTV captured Jimeone Roberts, 29, slapping more than 50 offensive posters, many featuring the swastika symbol, on signposts, walls and windows along Hawthorn and Balaclava roads in Caulfield on May 12.

His defiant actions came a day after the Victorian government announced plans to amend the Nazi Symbol Prohibition Bill, which would make it illegal to publicly display the swastika.

Roberts, from Elwood, fronted Moorabbin Magistrates’ Court on Monday where he pleaded guilty to posting bills without consent, behaving in an offensive manner and being a public nuisance.

Magistrate David Starvaggi said it was “one of the most disgusting, vile, repugnant acts of anti-Semitism and racial behaviour that I have ever seen”.