Join us for a provocative talk with Growing up Jewish in Australia author, Helen Wolfers.

In a provocative talk based on her book, author Helen Wolfers describes the challenges she experienced growing up as the daughter of Jewish immigrants in the xenophobic, anti-Semitic Australia of her childhood.

Helen was born in Sydney in 1932 graduating from Sydney Girls High School in 1949 and from Melbourne University in 1956. She worked for the United Nations population control programs in Singapore, London and New York from 1965 to 1974. She lived in Israel from 1977 to 1994 and returned to Australia in 1995. 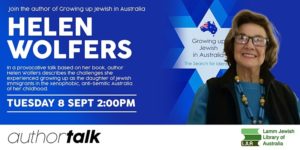