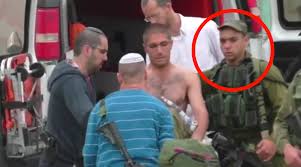 Amateur video appearing to show an Israeli soldier killing an already wounded Palestinian attacker has sparked uproar in Israel, reflecting deep divisions in the country after six months of violence.

As the Israeli military pressed on with an investigation on Sunday, right-wing politicians accused the army of abandoning the soldier, while left-wingers bemoaned the erosion of the nation’s morals.

Palestinians said the shooting proved their claims that Israel is guilty of  excessive force and extra-judicial killings.
Read more in the Sydney Morning Herald