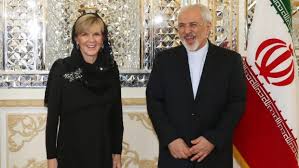 Australia recently hosted Iranian Foreign Minister Dr Mohammad Javad Zarif, the Islamic Republic’s urbane and seemingly moderate face. However, charm and a lovely accent do not make someone a moderate. In fact analysis of his various comments while here reveals much about the unchanged nature of Iran’s brutal expansionist regime, and its hypocrisy.

For example, in opening remarks at his March 15 joint press conference with Foreign Minister Julie Bishop, he claimed, “We all need to co-operate together to fight IS and extremism.”

While Zarif may be moderate compared to Iran’s previous president, Mahmoud Ahmadinejad​, he would not have attained his lofty position without loyalty to the regime and its ideology. Foremost in that ideology is the drive to spread its Islamic revolution by any means necessary. To that end, Iran is the world’s foremost state sponsor of terrorism, with terror groups it funds, arms and directs including Hezbollah, Hamas, Palestinian Islamic Jihad, Shi’ite death squads in Iraq and Yemen’s Houthi rebels.

Furthermore, Iran’s support for the Assad regime has assisted it to kill almost 500,000 Syrians. The atrocities committed by Assad and his supporters, including Iran and Hezbollah, have in turn been ISIS’ major recruiting tool.
Advertisement

Zarif also professed to being happy human rights were discussed, claiming that they should be approached “more seriously”, rather than becoming “an instrument of political pressure.” Iran’s human rights record has, if anything, worsened under “moderate” President Hassan Rouhani​, with more than 1000 people executed there last year alone, and continuing abuse of gays, women and religious minorities. Yet Zarif dismisses any serious concerns as “an instrument of political pressure.”

In the next breath, he said Iran is “the only serious country in the region that holds elections.” In fact, the vetting of any genuine moderates and the ultimate power of the Supreme Leader mean Iran’s elections are only slightly more meaningful than the Clayton’s elections staged by Syria, Egypt and other autocracies. Further, tellingly, Zarif was hinting he regards Israel as not being a “serious” country – given it definitely is in the region and holds elections.

On Iran’s missiles, he claimed that they were only for defence, and said Iran has made a commitment that it “will not use force except in self-defence.” It may be true that Iran’s armed forces have seldom openly attacked other countries. Instead it trains, equips and supplies terrorist proxies to act on its behalf. Indeed, in late 2014, Alireza Zakani, an Iranian parliamentarian close to Supreme Leader Ayatollah Ali Khamenei, was able to claim that four Arab capitals – Damascus, Baghdad, Beirut and Yemen’s Sana’a – had fallen into Iran’s hands through these methods. The constant regime calls for Israel’s destruction, and the fact that missiles in the recent tests were emblazoned with the message “Israel must be wiped out”, written in Hebrew, demonstrate Iran’s real focus.

Zarif denied the missile tests had breached UN Resolution 2231, which gives effect to the nuclear deal, in part because the resolution only bans the testing of missiles “designed to be capable – not capable – … of carrying nuclear warheads.” He argued that as Iran has no nuclear warheads and does not design missiles to carry what it doesn’t have, 2231 does not apply.

This is pure misdirection. He is interpreting 2231 to bluntly assert that it permits Iran to test fire missiles capable of carrying nuclear warheads – until Iran actually has nuclear warheads. If so, not only is the nuclear deal even weaker than thought, 2231 actually strengthens Iran’s ability to build nuclear weapons delivery systems, rather than restricting it as intended by the drafters.

Asked about Russia’s withdrawal from Syria, Zarif said Iran welcomes it, adding Iran recognises the need for a ceasefire, and a “political solution.” Of course, Iran’s political solution is for the murderous Assad to retain power. Zarif also said the ceasefire “Obviously… doesn’t include Daesh, it doesn’t include al-Nusra, it doesn’t include people who are collaborating with them.” Given the complexities of the Syria conflict, just about every opposition group could be said to be collaborating with al-Nusra. In effect, Zarif is re-interpreting the ceasefire to mean Iran and other pro-Assad forces can continue fighting, but their opponents can’t.

In a March 16 interview on ABC TV’s “Lateline”, Zarif complained that people in Australia consider Iranian missile tests provocative, but didn’t object when Israel or the US threatened to use bunker buster bombs against Iran’s “peaceful nuclear facilities.” Of course, anyone who reads International Atomic Energy Agency reports, or looks at how Iran built its nuclear program in secret, knows that these facilities were absolutely not built for “peaceful” purposes. And it’s a bit rich to warn of supposed Israeli aggression when Iran constantly insists Israel “must be destroyed”, and funds, trains and even commands various terror groups on Israel’s borders who try to give effect to this demand.

A famous quip defines a diplomat as “an honest man sent abroad to lie for his country”. Whether or not he is honest, Dr. Zarif is certainly a good diplomat – but Australian policy-makers and opinion leaders would be foolish indeed to be taken in by his lies and misdirection. Australia’s interests require that we recognise that Iran is the leading international state sponsor of terror, the leading source of aggression and destabilisation in the Middle East, a human rights horror, a proliferation nightmare, and a country which routinely flouts its international obligations, and act accordingly.

Dr Colin Rubenstein is executive director of the Australia/Israel and Jewish Affairs Council and formerly lectured in Middle East politics at Monash University.

Article from The Age