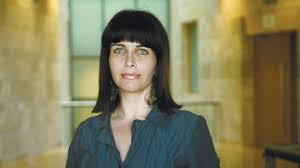 Washington Institute Fellow, former Labour MK and foreign policy expert Einat Wilf recently addressed ALP activists and Jewish community members in Sydney on the status of the Israeli left, the US Presidential elections and the prospects for a Palestinian-Israeli peace process

Wilf, who was in Sydney as a guest of the NSW United Israel Appeal Women’s Division campaign, helped launch the NSW branch of the Australia Israel Labor Dialogue (AILD) in February 2015.

“The main problem with the Israeli left and Labour, for quite some time, has been a failure to come to terms with the question of why the negotiations with the Palestinians have failed,” said Wilf.

“The left also finds itself with no good answer to what to do now… the Israeli left and Labour don’t have an answer to the question what do we do next.”

“We have been negotiating for 20-something years, it is time to put forward a map and say this is it…. Let’s be very clear about our position, to the world we need to show that we are putting an offer which they consider fair… and open a discussion.”

She said “I think it’s time for the Israeli left to put forward a map which clearly delineates our claims and charts the border and say this is our claim and no more.”

Wilf spelled out some of the significant Israeli concerns regarding the peace negotiations and widespread disappointment that “the Palestinians did not take the two concrete opportunities to have a State.”

“In history, if people want a state they say yes,” commented Wilf. “The partition proposal was for half of the territory previously promised… even though that was the map the Zionist and Jewish leaders said yes.”

“I have come to the conclusion that no real agreement will be possible until the Palestinians let go of the idea that we are foreigners, colonialists, crusaders who have no right to the land… they need to acknowledge that we have a right to the land.”

“If we are to ever have peace, both sides need to accept that they cannot have it all and that their return will be territorially limited.”

With the discussion taking place immediately following the Presidential candidates’ addresses to the AIPAC conference in Washington, Wilf concluded with her observations on the US Presidential race, implications for Israel and recent efforts to broker peace.

“The process has never suffered from an absence of enthusiastic mediators,” she said.

“The Israeli-Palestinian conflict has become this holy grail of international diplomacy. There is almost a sense among diplomats if you don’t try and broker this and don’t try and intervene then you’re not a diplomat.”

“I dearly hope that whoever is President will have the sense to let the sides reach appropriate understandings and come in when the two sides show them they need them,” she concluded.

Full report is at JWire