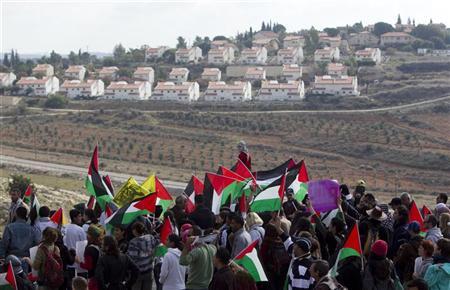 Palestinian and left-wing Israeli demonstrators rally during a weekly protest against a nearby Jewish settlement, seen in the background, in the West Bank village of Nabi Saleh, near Ramallah December 16, 2011. REUTERS/Darren Whiteside

In 2014, Israeli-owned company SodaStream announced it was closing its West Bank factory after pressure from those boycotting Israeli settlements. While supporters claimed a victory, nearly 500 Palestinians who had worked in harmony alongside Israeli Jews and enjoyed wages four or five times higher than the average in the West Bank were left jobless. Simply because the factory was located in an Israeli settlement. There is no question that Israel’s settlements in the West Bank are one of the key unresolved issues in the Israel-Palestinian conflict.

Jewish settlement in the territory of ancient Judea and Samaria (the West Bank) is often presented as a recent phenomenon but Jewish presence has existed there for thousands of years. Many settlements are located where previous Jewish communities were forcibly ousted by Arab armies or militia, or slaughtered, like the Jewish community of Hebron in 1929.

The Mandate for Palestine, a historical document of international law adopted by the League of Nations in 1922, laid down the Jewish legal right to settle anywhere in western Palestine. The West Bank is an unallocated part of the British Mandate, so its terms still apply and settlement can continue until a new state is created or annexation takes place.

Israel is often said to be breaching the fourth Geneva Convention which prohibits the transfer of segments of the population of a state to the territory of another state which it has occupied. First, at no point in history were Jerusalem and the West Bank subject to Palestinian Arab sovereignty thus it cannot be “occupied territory”. Second, the settlements have been built up voluntarily, often by citizens looking to return to their previous homes, or to the land once inhabited by their ancestors.
Advertisement

In short: the fourth Geneva Convention article does not apply to voluntary Jewish settlement in the West Bank. This is legitimately acquired land that has never belonged to a previous lawful sovereign and was designated as part of a Jewish state under the League of Nations Mandate.

Some consider Israeli settlements as the key to Middle East peace, but the facts say otherwise.

The Arabs and Palestinians refused to make peace before there was a single settlement. The Palestinians have been offered a homeland on four separate occasions – in 1937, 1947, 2000-2001 and 2008. The two most recent offers included unprecedented terms like the returning of refugees, generous land swaps and, significantly, an end to settlements. Each offer was rejected and instead met with increased terrorism from Hamas and the Palestinian Islamic Jihad, with the support of the Palestinian Authority through paying wages to the terrorists and their families, glorifying terrorists and continued incitement.

Israel’s repeated offers of relinquishing control over most of the territories, swapping land within Israel’s pre-1967 territory for any part of the West Bank it retains and disbanding settlements in the remaining part of the West Bank, would have resulted in the establishment of a Palestinian state. This is the two-state solution that Israel – and the US, the European Union, Britain and both Australia’s main political parties – all support.

The continual rejection by the Palestinians of comprehensive peace offers is not because of the presence of Israeli settlements in a tiny portion of the West Bank. No matter what offer Israel makes, no matter how far-reaching the concessions may be, it is Israel’s very existence which is the sticking point. There can be no dispute that continual Palestinian rejection of the two-state solution lies at the heart of the conflict. Peace requires, first and foremost, Palestinian acceptance of Israel’s right to existence in peace and security.

The full article published in The Age and Sydney Morning Herald by Shmuel Ben Shmuel (Israel’s ambassador to Australia). Comments are invited there.

An additional article by Shmuel Ben Shmuel has been published in the The Age/Sydney Morning Herald.